A Crash Course in Politics 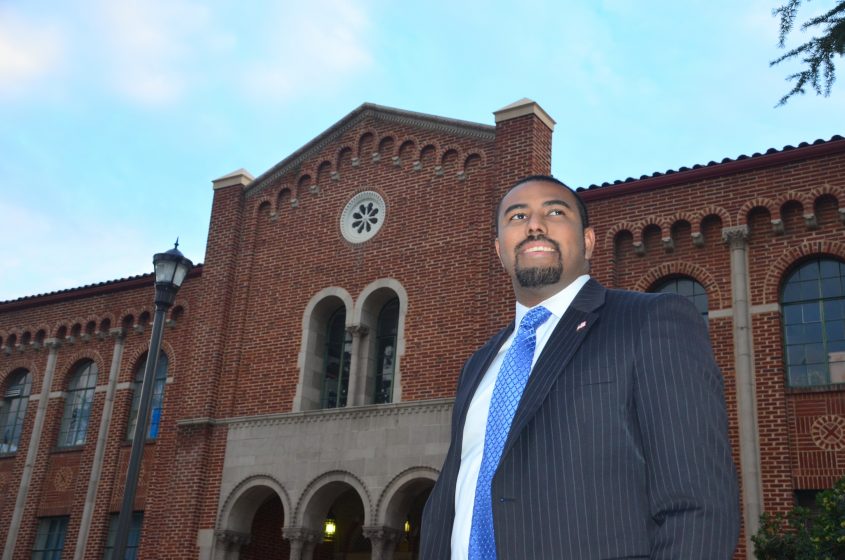 At least one ran for office. Another handled a presidential candidate’s digital correspondence. A third harnessed emerging media to further her political activism. It was an election year, after all — a time when Department of Public Policy graduates are even more likely than usual to get engaged in the democratic process.

Recent UCLA Luskin alumnus Nelson Esparza MPP ’15 sought public office by running for and winning a seat on his county school board back home in Fresno.

Esparza, who teaches economics at a community college, sees the role as a perfect fit. “The Board of Education is especially personal because I am the students of my district,” said Esparza, who grew up in California’s Central Valley. “I faced the same barriers and obstacles that students in my district are battling every day.”

His political journey began at age 16, he recalls, when a teacher sparked his interest in economics and put him on a path that eventually led to Luskin and on to politics.

“I had a broad desire to understand how the world worked, where the money flowed, why things happened the way they did,” Esparza said. “And economics sounded like it might teach me just that.”

After obtaining what he calls “a sweet fellowship in Sacramento” as an undergrad, Esparza experienced a “crash course” in California politics and public policy.

“And that was it – I was sold,” he said. “My passion was impacting public policy in my home state and home community.”

That led him to the UCLA Luskin School of Public Affairs. “My collective experience at Luskin was invaluable,” he said. “It was a place where I could capitalize on my experience and interest in impacting public policy at the state and local level.”

Now he’s ready to show the value of that Luskin degree. “I want to have the ability to point and say, ‘We produce change agents in a wide range of capacities, including elected.’”

Vernessa Shih MPP ’14 spent the 2016 campaign working at Hillary for America in Brooklyn, N.Y., where she served as digital correspondence manager for presidential candidate Hillary Clinton.

Another recent MPP graduate, Vernessa Shih MPP ’14, got a chance to relive one of her favorite student memories — a presidential debate — from an insider’s perspective. Shih spent the 2016 campaign working at Hillary for America in Brooklyn, N.Y., where she served as digital correspondence manager. On any given day, she would respond to people with policy questions, pull content to circulate to the campaign’s digital team or pitch a great story to the speechwriting team for possible inclusion in Hillary Clinton’s remarks.

“It’s still a bit surreal when I think about being on this campaign now,” Shih said as Election Day drew near. “It’s the most exciting thing I’ve ever done, and it’s also the most tired I’ve ever been.”

Shih credits her time at the Luskin School with opportunities to seek and grow in leadership.

“Through working with the Public Policy Department and the Dean’s Office, I felt a great deal of agency to convene opportunities for my class,”

Shih said. “Those were some of my first experiences in project management. I learned a lot from the successes and failures of trying to convene people and resources.”

Shih also said she has been challenged to grow in her understanding of other people’s experiences and the big and small details that affect others’ lives.

“This has been a really challenging year for this country. The one thing that seems to cut through all the static is remembering that everything I am doing is in the hopes of continuing forward progress,” Shih said. She hopes the next generation will “have a more diverse, more open and, hopefully, more equitable future than even I had.”

But, these labels only scratch the surface of her many creative and empowering efforts. She co-hosts a podcast called “GoodMuslimBadMuslim,” an ongoing discussion on “walking this fine line between what it means to be good and bad” as a Muslim American woman. And she works with the organization 18MillionRising to empower Asian Americans — nearly 6 percent of the U.S. population – to vote.

“We are currently going full force on turning out the vote,” said the Los Angeles-based Ahmed.

Ahmed said she’s helped mobilize thousands of Asian American and Pacific Islanders — representing at least 17 different languages — to go to the polls in the past 15 years.

“I always knew I wanted to leave the world a better place than when I came into it,” said Ahmed, who was honored in September with a Rising Star award by the Organization of Chinese Americans of Greater Los Angeles (OCA-GLA). The mixed-media artist, essayist and poet explained that vision is what motivated her to work in Washington, D.C. as an environmental organizer starting in 2001. In 2016 Ahmed was honored as a White House Champion of Change for Asian American and Pacific Islander Art and Storytelling.

“To this day, I take those learnings on racial justice and incorporate it into what I do now.”