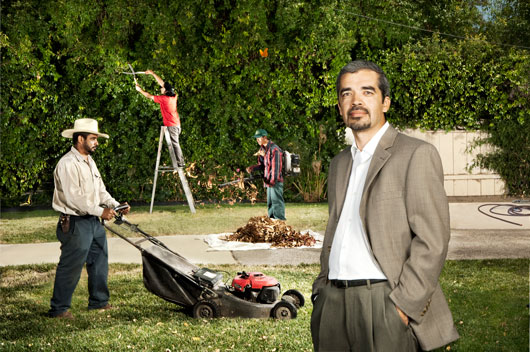 Visiting scholar Alvaro Huerta creates new type of work, where he conducts research, writes, and teaches, but also works in the community.

He’s organized a hunger strike for gardeners but he’s also written children’s stories. He’s an accomplished academic but also a passionate activist who in 2005 was honored with the Charles E. Young Humanitarian Award for creating the Gardener Leadership Development Project. Alvaro Huerta ’03, M.A. ’06 is the face of the new America, bridging the gap between scholarship and social activism, bringing to both the insights and perspective of a son of Mexican immigrants.

Huerta, currently studying city and urban planning at UC Berkeley and a visiting scholar at UCLA’s Chicano Studies Research Center, says his goal is to understand “how people find ways to make an honest living and collect census information of undocumented workers, to figure out how they organize and how they survive in a hostile economy.”

“He’s heading into an entirely new type of work, what I’d call an academic practitioner,” says Leo Estrada, a professor in the Department of Urban Planning, who has known Huerta for over eight years. “He conducts research, writes, and teaches, but also has a foot in the community. He’s created this new kind of entity.”

Intervening in Violence: “People Join Gangs Because of a Lethal Absence of...
Scroll to top