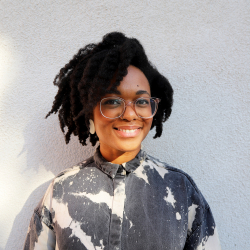 Master of Architecture and Master of Landscape Architecture, University of Pennsylvania's Weitzman School of Design
B.S. in Urban Studies and Planning, Massachusetts Institute of Technology

Farre (“Faye”) Nixon (she/her) is a freelance designer and adjunct instructor residing in Los Angeles. She holds a Bachelor of Science in Urban Studies and Planning from MIT and dual Master degrees in Architecture and Landscape Architecture from the University of Pennsylvania’s Weitzman School of Design.

Her research interests include investigating speculative and critical design methodologies, using creative writing techniques such as worldbuilding as a design tool, interrogating the ways emerging technologies and design intersect, and designing for humans and their non-human counterparts within the context of uncertain climate futures. She was recently contracted as a Design Lead with Experimental Design, an agency specializing in the creation and visualization of narrative worlds, where she led a team of researchers, screenwriters, and producers to visualize a future in which a major European auto manufacturer transitioned away from producing cars to instead become a global leader in the circular economy.

Faye is also a strong advocate for transdisciplinary and collaborative practice, an ethos she tries to embody through her own practice as a planner, architect, landscape designer, and co-instructor. She currently co-teaches Advanced Visual Communications for graduate planning students at UCLA with Ellen Epley, and Asymmetries of Access, a transdisciplinary seminar on the participatory design of public spaces for the inclusion of racial and gender non-conforming minorities, at the University of Southern California. She has previously worked as a Landscape Designer for the non-profit planning and design firm Kounkuey Design Initiative (KDI) and for the Oslo-based office of Snøhetta