“Edward Soja, a geographer at UCLA, has spent much of his long career trying to read Los Angeles,” the reviewer, journalist and UCLA academic Jon Christensen writes. “Along the way, he developed innovative and sometimes controversial theories of urbanization and became a founder of a dynamic ‘L.A. School’ of urban studies.”

In placing Soja at the creation of this school of thought, Christensen, who is the editor of Boom: A Journal of California, credits Soja with “some of the most provocative and productive ideas to our understanding of cities in recent history.”

Soja’s book primarily addresses Los Angeles’ socio-economic landscape in the wake of the 1992 civil unrest, which he sees as a consequence of decades of economic decline and racial isolation. The key factor to future growth will be networks — of employment, transportation and culture — that serve all areas of the city and empower stronger communities and individuals.

Soja’s observations are important, Christensen writes. “In the next 30 to 40 years, as the worldwide population grows from 7 billion to 9 billion and possibly more, all of that growth effectively will be absorbed in cities, doubling the urban population on Earth.”

“That means the urban built environment will double too,” he continues. “The shape of those urban spaces, as Edward Soja shows, will fundamentally shape the future.”

My Los Angeles is published by the University of California Press. 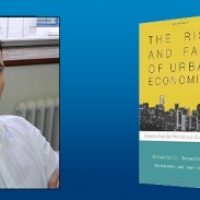 Answering President Obama’s Call to Use ‘Climate Data’ to... Journalist Sasha Issenberg to be Civil Society Fellow
Scroll to top