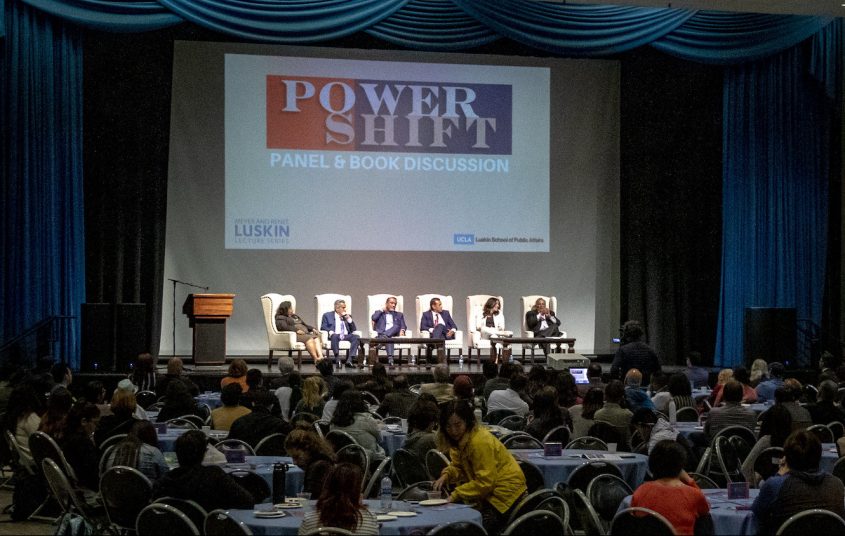 Political figures on the front lines of Latino empowerment over the last half-century share their stories at the May 14 UCLA Luskin Lecture. Photo by Les Dunseith

Leading Los Angeles political figures who paved the way for Latino empowerment over the last half-century took the stage at UCLA to share their strategies and personal stories — and underscore that the work is not finished.

To longtime Angelenos, their names were familiar: Alatorre, Cedillo, Molina, Polanco and Villaraigosa. Collectively, their influence has been felt far beyond Southern California.

The speakers are among 10 L.A.-based pioneers profiled in the book “Power Shift: How Latinos in California Transformed Politics in America.” Authors George Pla and David Ayón joined the May 14 conversation in the Ackerman Grand Ballroom as part of the Meyer and Renee Luskin Lecture Series.

“There are 60 million Latinos in the United States, 15 million in California. And the panelists are right, they continue to be stereotyped, continue to be invisible,” Pla said. “But ‘Power Shift’ is not about one group over another. It’s an American story about a group of individuals who have made contributions to our entire society in California and the United States.”

“We had to kick open the door in order to really get in there and set the example,” said Gloria Molina, the first Latina to be elected to the California legislature and to Los Angeles City Council and the first woman on the L.A. County Board of Supervisors.

“Being the first, everybody was watching. It’s really very important to be at your best all of the time,” she said.

Friends since high school, Gil Cedillo and Antonio Villaraigosa became passionate political activists during their years at UCLA in the early 1970s. Cedillo went on to serve in the state legislature and now sits on the L.A. City Council. Villaraigosa spent decades in public service, including as speaker of the California Assembly and mayor of Los Angeles.

Also in the 1970s, Richard Alatorre was elected to the Assembly before becoming, in 1985, only the second Latino to serve on the L.A. City Council in the 20th Century.

Richard Polanco completed Alatorre’s Assembly term, launching a 15-year tenure in the legislature that was hailed for increasing Latino representation. 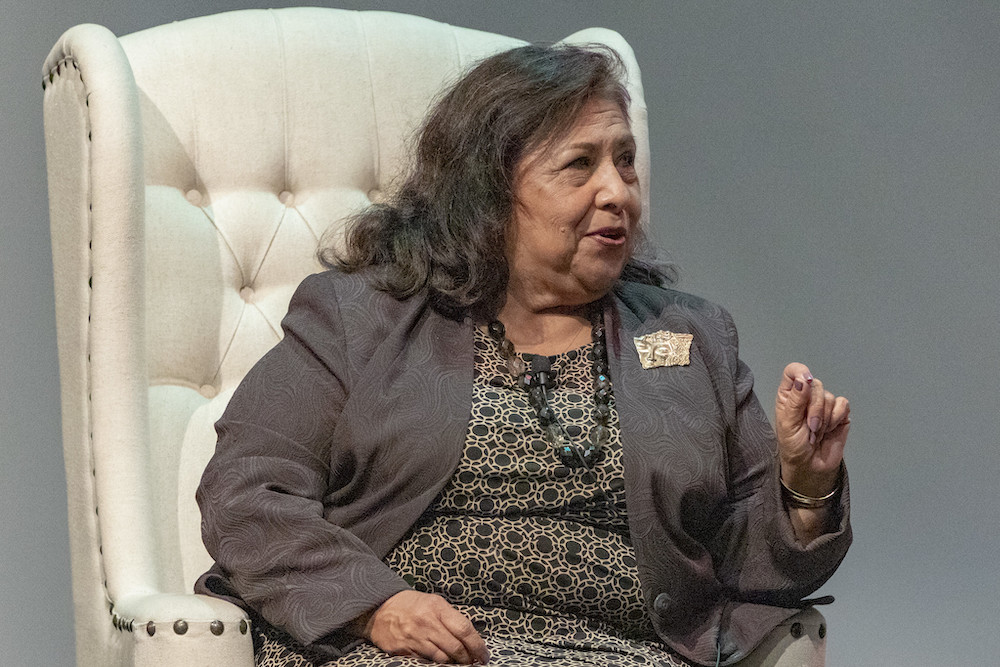 Gloria Molina called on Latinos to break ground in business, healthcare, arts and education, as well as politics. Photo by Les Dunseith 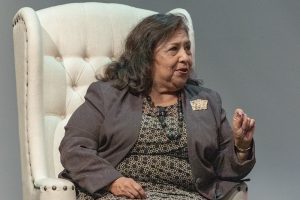 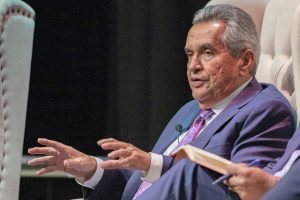 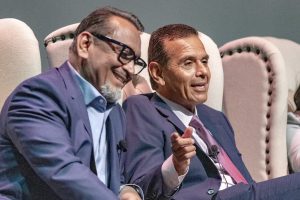 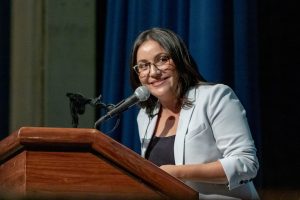 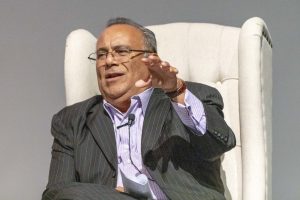 “Tonight is really important to me personally,” said Gary Segura, dean of the UCLA Luskin School of Public Affairs, which hosted the event. Segura’s work in Latino politics began in the 1990s, when California was roiled by two ballot initiatives. Proposition 187, which denied public services to undocumented immigrants, was later found unconstitutional. Proposition 209, which banned affirmative action in public hiring and university admissions, is still in place.

“I owe my career, and in many ways my current position, to the mobilization of Latino electorates and leaders that resulted in those wars of the mid-1990s that reshaped California and will reshape, eventually, the United States,” Segura said.

Sonja Diaz, the evening’s moderator, noted that the gathered leaders were anything but single-issue politicians. On health care, LGBTQ issues, voting rights and community development, they effected changes felt far beyond the Latino community, said Diaz, executive director of the Latino Policy and Politics Initiative, which is based at UCLA Luskin.

Villaraigosa concurred. “Across the board, all of us, we were not just Latino leaders, we were leaders for the whole state. We were progressives in our time, focusing on issues across the spectrum,” he said.

While coalition-building is important, Cedillo said, “We should be very clear that our community at this very moment is under attack, under siege” by a Trump Administration that has demonized the Latino community. “We should not pause or be shy about organizing ourselves as a community to defend our interests.”

Inspiring the next generation of Latino leaders is key to that effort and part of the reason “Power Shift” was written. The book also profiles political and labor leaders Miguel Contreras, Maria Elena Durazo, Ed Roybal, Art Torres and Esteban Torres.

Tatiana Velasquez, a chemistry and materials science major, and Patricia Valdezco, a political science major, said they grew up in California but were not aware of the trailblazing history of the evening’s speakers.

“It always goes back to the state curriculum, and what’s being taught is not this,” Velasquez said.

Molina recounted a conversation with her young niece, who read “Power Shift” and asked her classmates to name leaders in the Latino community.

“These sixth-graders had a hard time coming up with a name, but they finally concluded that it was Cesar Chavez and Pitbull,” Molina said. “The children got very angry. … They said, ‘Why aren’t we learning this? Why don’t we know this?’ ”

She added, “We need young people to understand that this isn’t a history that was, oh, way back then and now is now. We need to continue that kind of leadership today. … We are not finished. Our agenda has just begun.”

View photos from the UCLA Luskin Lecture on Flickr. 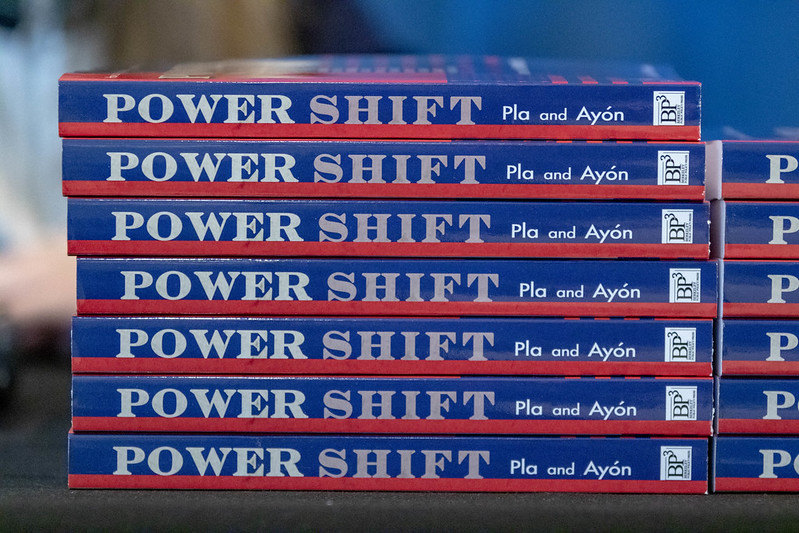 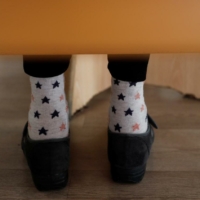 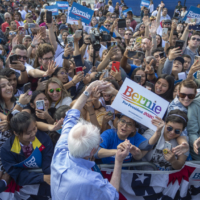