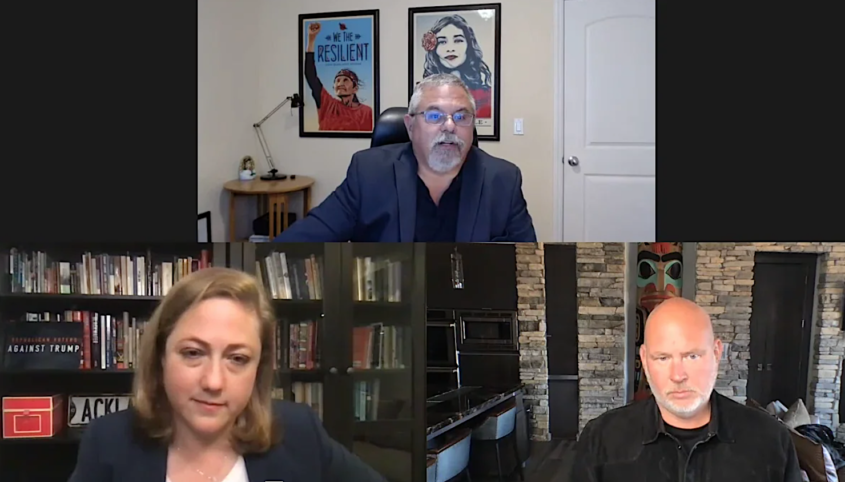 With Election Day just over a week away, two Republican insiders who broke from their party to take up the fight against Donald Trump will soon learn the fate of a president they view as “an autocrat who is unfaithful to the American republic’s ideas and ideals.”

Those biting words came from longtime GOP strategist Steve Schmidt, who shared his assessment of Trump’s presidency and the state of the Republican Party in a rousing conversation launching the 2020-21 UCLA Luskin Lecture Series.

“We should be honest with each other about this season of insanity and chaos because we have to figure out how to fix it,” said Schmidt, co-founder of the Lincoln Project, launched by disenchanted Republicans in late 2019 to defeat Trump and his allies.

Joining Schmidt at the Oct. 21 event was leading conservative voice Sarah Longwell, who said she was compelled to swim against the Republican mainstream by “this once-in-a-lifetime threat to democracy.”

“It was going to be a lot harder to keep my mouth shut,” Longwell said of her decision to break ranks  early in Trump’s presidency. “I have found it to be much more shocking that other people haven’t spoken up.”

Schmidt and Longwell are proponents of a moderate-conservative agenda that they say has been hijacked by the current administration. Their dialogue, hosted by the UCLA Luskin School of Public Affairs and USC Schwarzenegger Institute for State and Global Policy, drew hundreds of viewers from as far away as Spain, Singapore and New Zealand.

‘More and more Republicans every day are coming through that breach line and saying, “You know what? We’re just not doing this for four more years.”’ — Steve Schmidt, co-founder of the Lincoln Project

UCLA Luskin Dean Gary Segura guided the virtual conversation, pressing the guests — who each spent several years shaping Republican campaigns and communications — about the role they have personally played in creating today’s GOP.

Longwell, former national board chair of the Log Cabin Republicans, said she joined the conservative movement for its “big ideas and sensible policies,” then watched as it was contorted to fit into a populist, nationalist frame.

“When you say Trumpism, I’m not sure that people have a great sense of what that means other than the roiling morass of the last three years,” she said.

Schmidt is a communications and public affairs strategist who has worked on political campaigns for former Republican officeholders such as President George W. Bush, California Gov. Arnold Schwarzenegger and Arizona Sen. John McCain. He and Longwell place themselves on the center-right of the political spectrum, but each has a distinct interpretation of what lies ahead for the GOP — including predictions for future presidential candidates.

Schmidt forecast a Republican “bloodbath” on Nov. 3 and was unabashedly pessimistic about the party’s future.

“The Republican Party will not reform in defeat. It will get crazier,” he said. “It will become more extreme, more insular, and that’s the death spiral of the national party.”

Longwell, in contrast, envisions a candidate who attempts to fuse the Trump and establishment wings — a candidate such as Nikki Haley, former U.N. ambassador and governor of South Carolina.

This would create a dilemma for conservatives, she said: Do you support a compromise Republican candidate such as Haley, who has one foot in the Trump camp? “Or do you help Democrats try to annihilate that thing altogether until it’s root-and-branch done with, and an entirely new generation of politicians rise up to take the mantle?”

Not until the Trump era has completely run its course does Longwell see a true revival of the Republican brand.

“It is possible that Donald Trump is like the Iraq War,” she said. “It was very popular for a period of time, and now you can’t find a single person who ever supported it. … It is possible that he goes down in flames and nobody wants to touch him again.”

Schmidt said the nation’s political future hinges on which faction of the Democratic Party takes hold.

For the current election cycle, Longwell co-founded Defending Democracy Together, a nonprofit aimed at turning red votes blue to put Democrat Joe Biden over the top as president. Key to Longwell’s campaign is the dissemination of personal testimonials from ordinary citizens who plan to switch sides for the first time.

“So many of these people tell really deeply moving stories. They talk about being really religious or deeply pro-life and why they voted Republican all their lives … and why they had to vote against Donald Trump in 2020,” she said.

Longwell held out faith that under strong, decent leadership, Americans can bridge their divide.

“There are actually a bunch of places where there’s broad consensus among the American public … places where there are pragmatic solutions that politicians for a long time have had every incentive to keep us from achieving because they’d rather have the issue than the solution, to keep jamming us further and further apart.”

Schmidt said he helped launch the Lincoln Project political action committee after watching with alarm last fall as Democratic primary contenders battled each other instead of focusing on Trump.

“It was our point of view that no one had fought Donald Trump effectively for many, many years. No one had drawn blood on him,” he said.

The Lincoln Project boasts a sophisticated data operation that targets swing counties and precincts across the country. But it’s better known for its ads skewering Trump’s record.

Now, said Schmidt, “More and more Republicans every day are coming through that breach line and saying, ‘You know what? We’re just not doing this for four more years.’ ”

Once the 2020 election cycle is complete, the Lincoln Project plans to set its sights on GOP lawmakers who closed ranks under the Trump presidency, particularly as COVID-19 savaged the nation.

“The fight will continue past this, because the consequences of what happened to the country is something we’re going to be digging out of for the next 10 years,” Schmidt said. “And the people responsible for it are not just named Trump.”

The Luskin Lecture Series enhances public discourse on topics relevant to the betterment of society. The 2020-21 series at the Luskin School will continue on Nov. 10 when Neera Tanden, a UCLA alumna and the current president and CEO of the Center for American Progress, joins Segura online for a post-election analysis.  Register here.

View a video of the Oct. 21 UCLA Luskin Lecture “Voices of Dissent.”

Ideas and Expertise Exchanged at Post-Debate Forum
Scroll to top