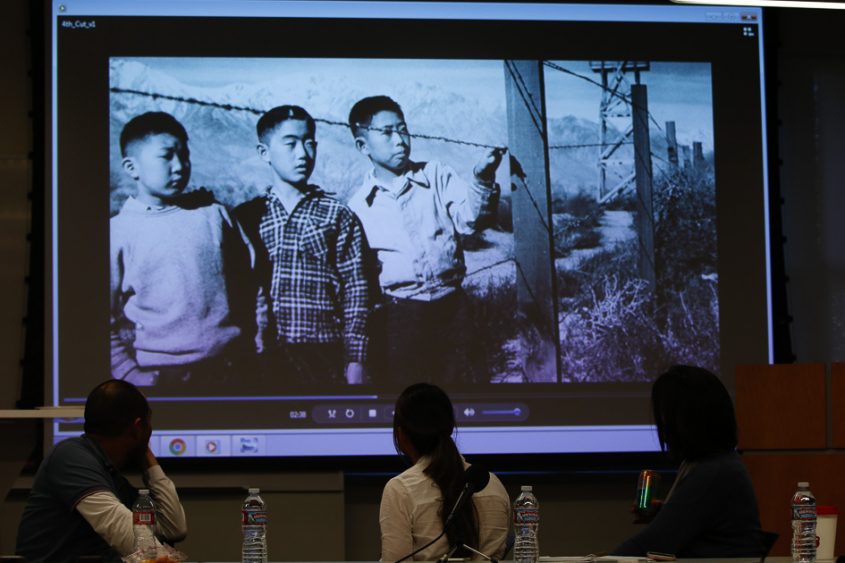 "Day of Remembrance" panelists watch a scene from one of the video presentations previewed during the event. Photo by Les Dunseith

Marking the passage of 75 years since a presidential executive order that led to the incarceration of Japanese Americans during World War II, the UCLA Luskin School of Public Affairs hosted a panel discussion on Feb. 23, 2017, that took place at a time when many U.S. citizens believe history is in danger of repeating itself.

Lisa Hasegawa, a UCLA Luskin Senior Fellow and an activist-in-residence, hosted the panel discussion at the UCLA Luskin School of Public Affairs. Photo by Les Dunseith

The session was opened by moderator Lisa Hasegawa, a UCLA Luskin Senior Fellow and one of two alumnae who are activists-in-residence on campus for the winter quarter. She told of her Japanese American family’s experience of being unjustly forced into internment camps in 1942. Hasegawa likened that long-ago situation to an executive order signed by President Donald Trump in January that sought to bar entry into the United States by immigrants from seven predominantly Muslim countries.

“All of us in different generations are trying to figure out how we learn the lessons from the past and figure out how we activate those lessons in our daily lives,” Hasegawa said of the correlation between these two historic and controversial presidential actions.

The desire for activism amid a political climate that many people find fearful was a dominant theme of the panel discussion, which included five activists and filmmakers. Several showed clips from documentary films and other video projects that they have helped create in response to the Trump administration and its efforts that seem to target minority populations, particularly Muslim Americans.

“When Trump got elected, it was definitely very devastating to the Muslim community. I think we were all in shock,” said panelist Tanzila “Taz” Ahmed MPP ’07, who co-hosts a popular podcast titled “#GoodMuslimBadMuslim.”

But Ahmed has since been heartened by the showings of support that have taken place at protest marches and rallies around the country, including a sit-in at LAX that united various ethnic communities in opposition to the immigration ban.

“It is super-powerful as a Muslim to go into these spaces and to see non-Muslim people of color coming together in solidarity,” Ahmed said.

The mass protests in January at Los Angeles International Airport were also the subject of a “rough cut” clip for a documentary film shown by panelist Tani Ikeda, a filmmaker and member of imMEDIAte Justice. Her video focuses on two women (one Muslim, one Japanese American) from a grassroots solidarity group known as Vigilant Love that helped organized the resistance effort at LAX.

Ikeda said her father, who had been incarcerated as a draft resister when he was young, inspired her involvement in political activism and her pursuit of filmmaking as a career. Ikeda said she struggled with frustrations about societal and educational hurdles related to her minority status when she was young, but her father advised her to find strength, not despair, in those moments.

“Everything that makes you different is what gives you this unique perspective on the world, and that’s so needed,” Ikeda said her father told her. “So start making art.”

Also joining the panel, which was sponsored by the UCLA Asian American Studies Center and the Institute on Inequality and Democracy at UCLA Luskin, was Sasha W. from the National Queer Asian Pacific Islander Alliance. She seeks to “redefine security” by helping more people understand why many U.S. residents, especially those at the margins of society, don’t always feel safe.

For example, she was recently involved in a project in which average U.S. citizens were approached on the streets under the pretext of an opinion survey, but then were asked the sorts of questions that someone being racially profiled would hear.

Two other filmmakers also joined the panel discussion. The team of Mustafa Rony Zona and Koji Steven Sakai are working together on a documentary about the experiences of a young Muslim girl and her mother who recently relocated from Syria to Los Angeles. And they are in the development stage of a feature film about what might happen if new terrorist attacks sparked a modern-day effort to round up Muslim Americans in a manner similar to what happened to Japanese Americans during World War II.

They hope to make a film that would lead people to recognize the parallels of the internment of Japanese Americans 75 years ago and anti-immigration efforts today. 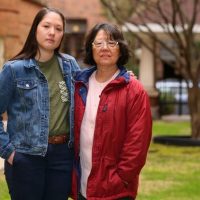 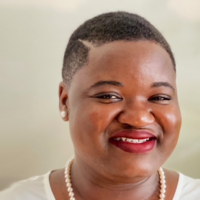 ‘It’s About Changing the Paradigm’
Scroll to top