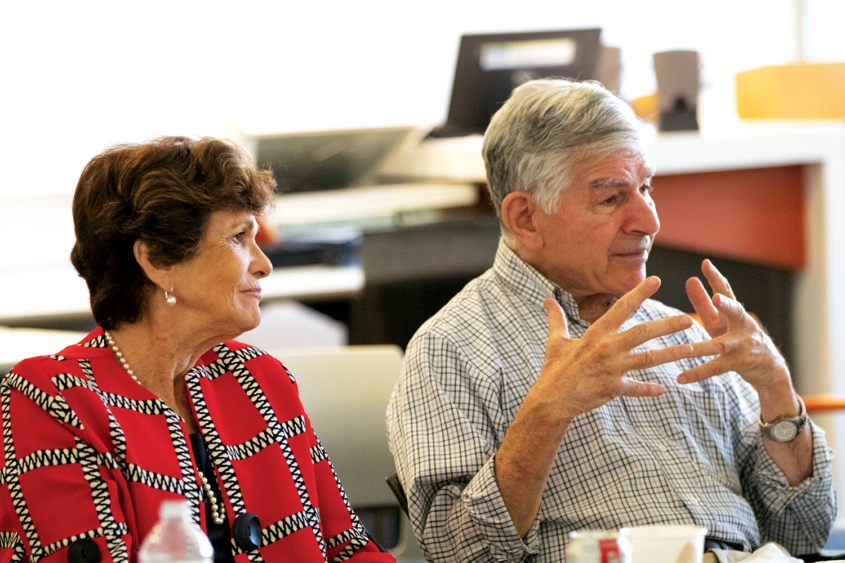 Kitty and Michael Dukakis during a 2019 lunch discussion at the Luskin School. Photo by Stan Paul

As the former governor of Massachusetts and a onetime Democratic nominee for president, UCLA Luskin faculty member Michael Dukakis knows a lot about leading during a crisis.

“The only thing that I had that, from a state standpoint, came even close to [the coronavirus crisis] was the famous blizzard of ’78,” said Dukakis, recalling a catastrophic storm that struck New England states and shut down air, rail and highways. Some commuters were trapped in their cars, and the storm destroyed homes and forced people to evacuate, and find food and shelter.

Thankfully, Dukakis’ secretary of public safety, Charles Barry, “just was obsessive on emergency planning,” he said.  “We had a detailed plan for dealing with emergencies and I said, ‘You run it, and you tell me what to say every afternoon at 3 o’clock,’ because I had shut down all traffic and all these other things and, fortunately, came out of it in great shape.”

Dukakis teaches a policy course on institutional leadership at UCLA Luskin each winter quarter, and it focuses on case studies that include his own experiences in government and public service. He stressed the importance of preparing public managers well, noting that graduate students should be serious about learning how to run an agency and deliver the goods during a crisis.

“If you are not organized for this, and you don’t have really superb people, look out,” Dukakis said. “Whoever is in charge should be someone who knows what he’s doing.”

The interview with Dukakis took place shortly after the stunning reversal of fortune of presidential candidate Joe Biden.

“This is an extraordinary year. What’s happened over the last 10 days is beyond extraordinary,” Dukakis said a few days after Biden swept to victory in 10 of 15 Democratic primary contests on Super Tuesday, March 3. “Nobody would have predicted it, including yours truly, and somebody smarter than me is going to have to try to figure out how it happened.”

Normally, at the end of the winter quarter, Dukakis meets with faculty and staff at the Luskin School to share advice and make political observations. This year, that meeting had to be canceled because of the novel coronavirus pandemic, which also temporarily delayed the return of Dukakis and his wife, Kitty, to their home in Massachusetts.

“What I would say to the faculty is that what Joe needs now — and you’ve heard this rant of mine before — is a first-class, 50-state, 200,000-precinct organization … and no more reds, blues and purples, firewalls and all that nonsense,” Dukakis said about what Biden would have to do to defeat Republican incumbent Donald Trump.

A presidential candidate has to be competitive in every single state, “if only to keep the opposition busy in those states,” reiterated Dukakis, who has guided a number of UCLA Luskin alumni to careers in public office and public service over the years.

“It’s all grass roots,” he continued. “They can raise enough money to run a campaign like this, but it’s a precinct captain in every precinct, six block captains” that win an election. “It’s so dependent on the quality and caliber of the people you have working for you. I can’t emphasize that enough. I don’t think people understand just how important that is.”

Called to Action
Scroll to top