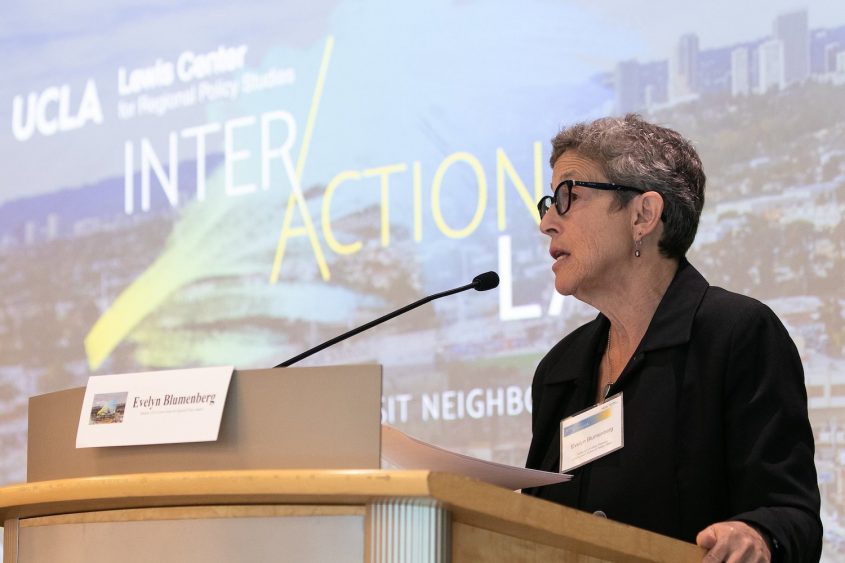 “There is a window of opportunity to do something different,” says Lewis Center Director Evelyn Blumenberg at the InterActions LA event. Photo by Amy Tierney

Los Angeles is populous and diverse, but that distinction also produces inequality. There are disparities in housing costs. Amenities vary across neighborhoods. Many low-income families struggle to make ends meet despite impressive gains in employment.

During an inaugural event focusing on regional growth and equity, the UCLA Lewis Center for Regional Policy Studies convened a group of experts to discuss how to leverage a sweeping, taxpayer-supported $120-billion investment in Los Angeles’ transportation system to address decades-old disparities.

Following the 2016 passage of Measure M, Metro committed $52 billion in sales tax revenue for capital investments throughout the county. The agency is looking to accelerate 28 projects by the time Los Angeles hosts the 2028 Summer Olympics. Senate Bill 1 approved in 2017 designated another $54 billion to fix roads, to relieve congestion, and to improve transit and trade corridors throughout California.

“The question is how can we improve the quality of communities by taking advantage of the ongoing and major regional investments in public transit,” said Evelyn Blumenberg MA UP ’90 Ph.D. ’95, director of the Lewis Center and professor of urban planning, at “InterActions LA: Inspiring Quality Transit Neighborhoods,” held April 18, 2019, at The California Endowment.

“It is precisely in these moments of rapid change when there is a window of opportunity to do something different,” Blumenberg said. “Hopefully, it’s to engage in more equitable outcomes that better connect residents to economic opportunities, that protect and expand affordable housing, and that improve the health and robustness of the L.A. region.”

Paul Ong, UCLA Luskin research professor and director of the Center for Neighborhood Knowledge, has done extensive research on the role of urban structures on the reproduction of inequality. He said this topic is an important one for discussion.

“We, as a society, make neighborhoods,” Ong said, “and neighborhoods make us. The type of neighborhood we live in determines not only today’s quality of life but the trajectory over generations.” 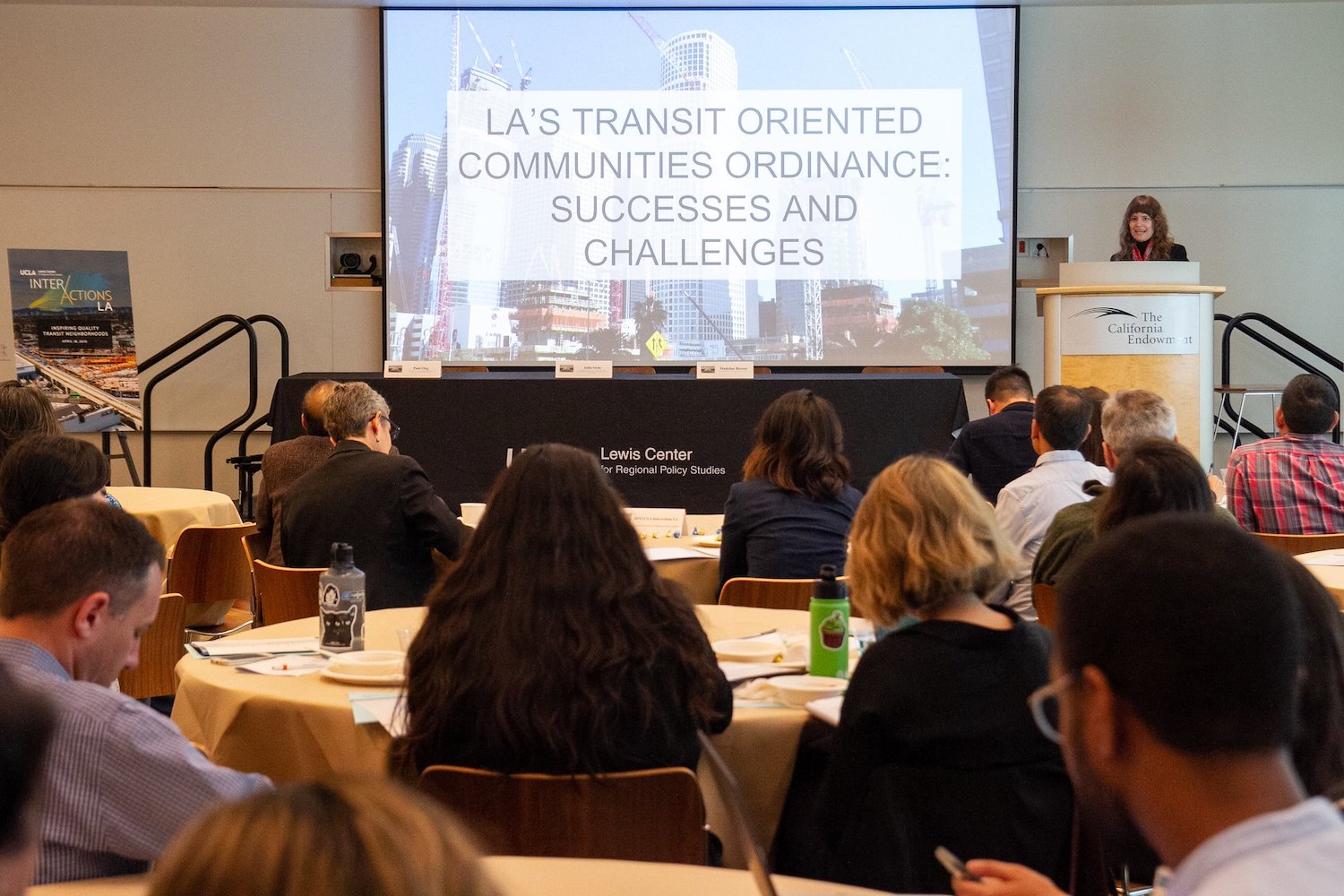 Julia Stein of the UCLA Emmett Institute on Climate Change and the Environment leads discussion. Photo by Amy Tierney 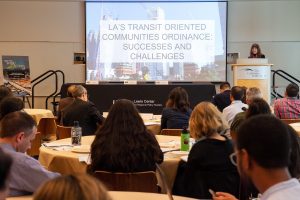 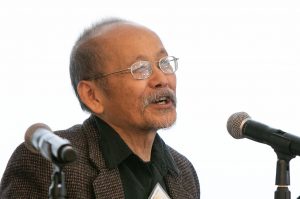 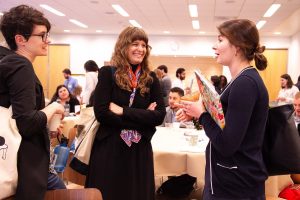 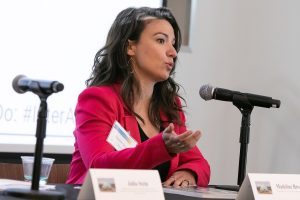 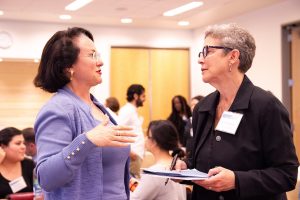 Multiple approaches to improve neighborhoods were discussed. They include progressive housing and land use policies, stationary design, neighborhood amenities and community engagement.

Key among the discussion was the need to focus on people who use transit and their specific needs. For example, women, older adults and people with disabilities make up about 60 percent of Los Angeles’ transit ridership. Those transit users have specific concerns about safety and security while walking to stations, waiting and riding transit, said Madeline Brozen MA UP ’11, deputy director of the Lewis Center.

“If we’re not planning for specific groups in an intentional way, it’s not likely we’re going to see the shifts we want to see from these investments,” Brozen said.

Julia Stein, project director at the Emmett Institute on Climate Change and the Environment at UCLA Law, said the city’s Transit Oriented Communities program, which provides incentives to developers to build near major transit stops and include affordable housing units, provides an opportunity to address some issues.

Since the program’s inception in 2017, about 2,400 affordable units have been proposed, of which 42 percent are reserved for extremely low-income households.

Attendees also heard about specific efforts being conducted in the city by nonprofit organizations, including improvements along Avenue 26 near Lincoln Heights and Cypress Park spearheaded by LA-Mas. The nonprofit agency engaged with community members to generate design improvements and creative wayfinding on a quarter-mile stretch near the Metro Gold Line station.

The end result was impressive, but Avital Aboody from LA-Mas said the permitting process was complex, expensive and time-consuming.

“We had the expertise and time to navigate this process, but that may not be the case for community members or grassroots organizations that may want to do this in their community,” she said.

Outside California, the Twin Cities region in Minnesota has a reputation for being progressive. But the community deals with stark racial disparities, which date back to decades of systemic racism, like redlining, according to Owen Duckworth, director of organizing and policy at the Alliance, a Minnesota-based coalition of community-based organizations and advocacy groups.

Now that the region is investing in transit infrastructure such as an expansion of a rail line that connects downtown Minneapolis to St. Paul, there is an opportunity for communities to have greater impact.

“Government agencies want to deliver on equity. That’s the buzzword,” Duckworth said. “We can’t have equitable outcomes by continuing inequitable processes in planning.”

Another theme echoed by many panelists is community engagement — making sure residents’ input is not merely tokenized by developers and government organizations.

Community members provide valuable insights as experts in their own neighborhoods.

“Our partners want to be partners to government agencies in community development, but there’s no compensation for these organizations. They mostly volunteer their time,” said Thomas Yee of LA THRIVES.

“Everything from here on out needs to be collaborative. We need to get away from silos. We need to work together,” Yee added.

Blumenberg ended the event by saying it is clear that multiple objectives must be met to ensure quality transit neighborhoods. To name a few, planners must consider housing, traffic, environmental concerns, access to opportunities, safety and security issues around mobility.

The solutions must be equally diverse — tailored to the different neighborhoods and communities throughout the region, she said.

Reinvigorating the Memory of Public Housing in Los Angeles
0 replies

Torres-Gil and Shoup on Disabled Parking Fraud
Scroll to top