Helping America’s Domestic Workers: ‘We Must Do Better’ 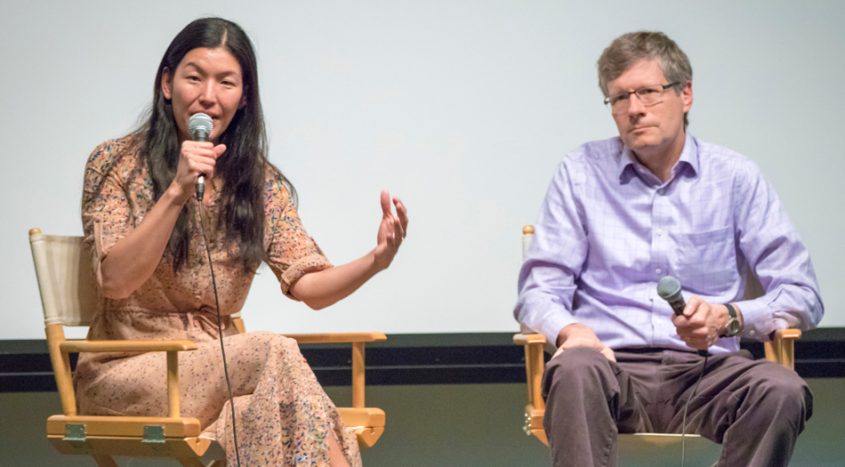 Ai-Jen Poo’s voice fills with joy when she talks about her immigrant family, especially her 90-year-old grandmother, who lives in the same San Gabriel Valley apartment she shared with her now-deceased husband for many years. Her grandmother, Poo says, taught her how to appreciate and cultivate laughter.

“My grandmother is living life on her terms,” Poo said. “She is the author of her own story.” That’s not the case for millions of other immigrants, however, and that’s where Poo’s career path begins.

Poo is director of the National Domestic Workers Alliance and co-director of the Caring Across Generations campaign. The 2014 MacArthur Fellow has devoted much of her life to rights for domestic workers, especially those who take care of our aging population.

In a Regents Lecture sponsored by the UCLA Luskin School of Public Affairs’ departments of Social Welfare and Urban Planning, Poo spoke about women, the future of work and race. “The heart of it,” she said, “is the question of care: How do we take care of each other, our families and one another in this economy?”

In his introduction of Poo, Urban Planning professor Chris Tilly described her as “one of the nation’s foremost thinkers and doers on worker rights, the care crisis and how to build a society that cares for its elders, its children, its disabled, but also cares for those doing the caring.”

Poo told the story of Ms. Sun, a home care worker who tends to Poo’s grandmother’s needs — lifting, cleaning, shopping and even cooking when needed. “We truly count on Ms. Sun to be there for us,” Poo said. “It’s the work that makes all other work possible. In our family, it makes everything possible. What could be more important than caring for the people we love? Yet, it’s among some of the most undervalued and vulnerable work in our economy today.”

She also told the audience about Mirla Alvagado, a Filipina caregiver in Chicago who helps elders in the community to live independently. “She’s had over 20 clients, working 24 hour shifts, four days a week, lifting her clients in and out of bed, bathing, administrating medicine, helping do physical therapy, cooking and cleaning,” Poo said. “For this work, Mirla takes home between $7 and $9 per hour. With these wages, she supports five children in the Philippines. With that plus the cost of rent for the room she lives in, some weeks Mirla barely has any money to pay for food.”

A recent study by the Public Health Institute revealed that the median wage for home care workers is $15,000 per year. “I don’t know a single town in this country where you can survive, yet alone raise a family, on $15,000 a year,” Poo said. “We can do better than this in America and, as the country changes, we must do better.”

Poo spoke proudly of the progress being made by the National Domestic Worker’s Alliance.

In 2015, after many years of advocacy by Secretary of Labor Thomas Perez, the Department of Labor changed a rule that brought 1.8 million home care workers under minimum wage and overtime protections after being excluded for eight years.

“We’re making progress, but it is not enough,” Poo said. “The future of work is at stake.”

People are living longer than ever before, she pointed out, because of advances in health care and technology, and Baby Boomers are starting to reach retirement age at a rate of one person every eight seconds — 10,000 people per day, 4 million people per year turning 65. The challenges will be daunting.

“We are going to need so much more care and support in the home that we’re going to need a very strong caregiving workforce to support all 21st century working families,” Poo said.

“Perhaps the most important lessons we can learn from domestic workers is about care itself,” Poo said. “Care connects us to our most basic and universal needs as humanity. Coming together to bring value, dignity and worth to caregiving work and our caregiving relationships to help bring out the best in us as a nation.”

The Power of Public Radio
Scroll to top