UCLA Blueprint — written and edited by veteran journalists and astute observers of local and state government — debuted this week with an issue focused on public safety and criminal justice. The magazine is a partnership between the UCLA Luskin School of Public Affairs and UCLA External Affairs, whose public outreach programs facilitate the campus’s role in addressing societal challenges.

At a Wednesday night event marking the magazine’s inaugural issue, Chancellor Gene Block said civic engagement has been one of his top priorities since the beginning of his administration. “UCLA engages with the greater Los Angeles community in myriad ways. And I am delighted to say that the launch of UCLA Blueprint is very much in keeping with our ongoing civic engagement efforts…. It’s dazzling in every way.”

The event featured a wide-ranging conversation between Garcetti and Blueprint Editor-in-Chief Jim Newton, covering crime, the mayor’s extensive use of real-time data and metrics to monitor the pulse of the city, Los Angeles’ booming tech sector, the recent minimum-wage increase and other topics in the news.

Newton is a former Los Angeles Times writer and editor of 25 years, the author of biographies on Earl Warren and Dwight Eisenhower, and a co-author of a memoir with Leon Panetta.  He said before the event that the magazine is intended to strengthen UCLA’s ties to civic life and share faculty expertise in a way that serves the greater good.

“Much of the work of city, county and state government in California is now done without the benefit of serious research,” said Newton, a senior fellow at the Luskin School and lecturer in communication studies, where he teaches courses on journalism ethics and writing. “Largely, that’s a product of budgets — governments just don’t have the kind of research capacity they used to have. By bringing UCLA research to the attention of policymakers, better policy can be made.”

In the editor’s note in the first issue, Newton wrote that he spent more than two decades “watching sausage being made in city, county and state government (and occasionally the school board), often baffled by the basis for decisions. Why doesn’t the subway go to the airport? Why does the region capture so little rainwater? Why do some drug offenders spend more time in prison than those convicted of violent crimes? The poison in each case is politics. The antidote is research.”

Newton emphasized before Wednesday’s event that Blueprint is not an academic journal. “We’re striving to make it serious and journalistic, a general-interest magazine that’s accessible to people beyond the core policy community,” he said. “This is a region that is famously disengaged on matters of serious government policy, and this magazine is intended to draw people into those conversations and give them the information they need to help them participate.”

Replete with bold, attention-getting graphics, the first issue of Blueprint takes a sweeping look at criminal justice and public safety from a variety of entry points. Beck, the LAPD’s top cop, talks about how policing has changed. UCLA Luskin researcher Michael Stoll reveals what’s behind the surge in the U.S. prison population. UCLA psychologist Phillip Atiba Goff explains how he measures hidden racial bias in law enforcement. And in a Q&A, California Attorney General Kamala Harris talks about the biggest challenge she has faced in fixing the state criminal justice system.

There’s also a profile of a community activist whose call for reform of the Los Angeles County Sheriff’s Department has been transformed into a rallying cry among protesters nationwide — “Black lives matter.”

Newton said the debut issue addresses criminal justice and public safety because police use of force is increasingly in the headlines and because the topics are familiar to him — he covered the LAPD as a reporter for five years.

In the discussion Wednesday, Garcetti reflected on the recent unrest in Baltimore and L.A.’s own problems.

“We had Rodney King.… We had the consent decree. We had Ramparts,” he said. “It is through the trauma that we went through that Los Angeles is a more resilient city and [has] a more resilient [police] department.… What a police chief says, what a mayor does, who we collectively are as a city in moments of potential trauma is, first and foremost, what good policing — good public safety — is all about.”

Blueprint’s second issue, due out this fall, will focus on economic and social inequality and include an interview with Joseph Stiglitz, recipient of the Nobel Memorial Prize in Economic Sciences, a Columbia University economist and respected author. Newton said he hopes the magazine will grow into a quarterly publication, and he plans to hold public events to extend the discourse around each new issue.

“Not only are we trying to create a conversation online and in print,” Newton said, “but a literal conversation where we will gather together policymakers, journalists, academics and other thoughtful people and hope that they learn from each other.” 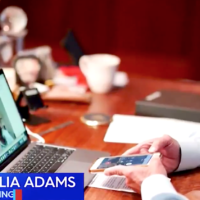 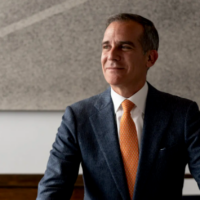