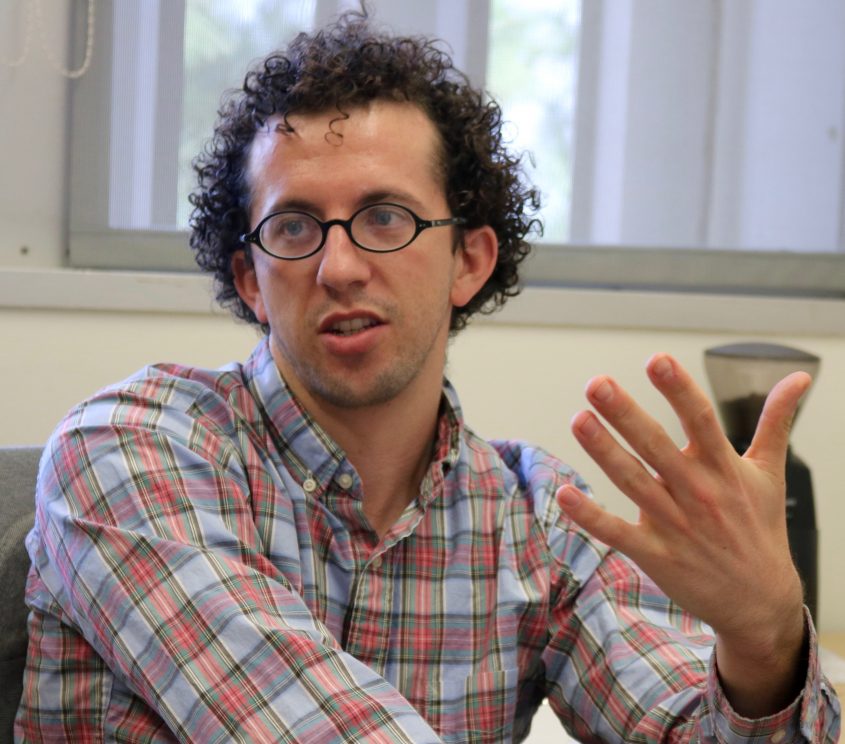 Zachary Steinert-Threlkeld of the UCLA Luskin Department of Public Policy studies mass protests such as the Arab Spring of 2011. Photo by George Foulsham

The wave of protests that erupted after Donald J. Trump’s unexpected presidential victory was no surprise to Zachary Steinert-Threlkeld, an assistant professor in the UCLA Luskin School of Public Affairs Department of Public Policy whose research focuses on spontaneous collective action and the mobilization of mass protests.

“There were protests before the election as well,” said Steinert-Threlkeld, noting that most of Trump’s campaign rallies were accompanied by small altercations between his supporters and opponents. “But I would be surprised if it persists. These things tend to die out” as time passes.

The ebb and flow of protest movements are one of the key elements of Steinert-Threlkeld’s research, which has looked primarily at the role of mass protest in countries where citizens rose up unexpectedly against authoritarian regimes.

During the Arab Spring of early 2011 that helped topple governments in Egypt and elsewhere in the Middle East and North Africa, for example, demonstrations had begun to subside before an emotional interview with a Google employee about his secret incarceration and interrogation by Egyptian police sparked new protests.

“Even in something as severe as overthrowing a dictator, there is a natural decay” in protest movements, Steinert-Threlkeld explained. Such mass actions tend to lose momentum unless new events arise to spark anger and trigger renewed focus, and this is likely to prove true in America as well.

“People get tired; people have jobs; you get fatigued from protesting,” Steinert-Threlkeld said. “Or maybe you just can’t afford to participate anymore.”

A new addition to the UCLA Luskin faculty this year, Steinert-Threlkeld said he has long been interested in collective actions, and that interest turned into serious research when the Arab Spring happened to occur during the first quarter of his first year in graduate school. His interest relates primarily to a desire to understand and analyze how people work together as groups, he said, not because he has any strong activist tendencies himself.

His academic pursuits look, in part, at the nature of protest movements. Contrary to what some may think, Steinert-Threlkeld has found that group actions are most often driven by those on the periphery of a protest — average people whose motivation is spontaneous and rooted in emotion. Protest organizers and political activists actually have little control over whether people get together or stay together, he found.

For instance, during the Arab Spring movement in Egypt, a protest organizer tried to put together a major rally early on, “and no one came out,” Steinert-Threlkeld said. One week later, the protest movement started around Cairo before converging on Tahrir Square. “Pockets of small protests sprang up around Cairo, with people just banging pots and pans, and walking through these narrow alleyways telling other people to come and join them,” Steinert-Threlkeld explained.

That’s when the movement in Egypt really took off, he said, because most demonstrators are much more likely to be motivated to action when they see “local people from your neighborhood protesting, which tells you that maybe you should join the protest too.”

In the case of the anti-Trump rallies, it’s therefore logical that most protests have occurred in places like California with a significant population of like-minded, politically liberal residents. Someone thinking about joining a protest is much more likely to actually participate, Steinert-Threlkeld said, if they know someone “who is protesting and could tell them where and when to go.”

The recent protests in the United States have primarily been peaceful, which is usually the more productive approach, according to Steinert-Threlkeld.

“The academic literature suggests that non-violent mass action is more effective because the protesters then have legitimacy. If you are destroying property, then the news media just focuses on the 10 people who are destroying property,” he said. “Violence would be bad for the protesters because it would decrease their legitimacy and make it harder for them to gain allies.”

One aspect of the post-election protests in the Unites States that is very different than the Arab Spring uprisings he studied, Steinert-Threlkeld said, is the lack of a clear path that would achieve the protestors’ rallying cry to “dump Trump.”

At this point, it’s unlikely that a Republican-controlled U.S. Congress would be motivated toward impeachment of Trump. “It has to be those people who voted for him who would have to tell their congresspeople to impeach him,” Steinert-Threlkeld said.

Barring a stunning change of opinion prompted by Trump’s actions as president, or disclosure of a criminal act on his part, Steinert-Threlkeld said it’s unlikely that U.S. protests will lead to “a regime change” as did the Arab Spring.

“In that sense, I think there’s much less at stake,” he said. “The extent of these protests is, perhaps, to set a check on a Trump Administration, to enlighten him and his allies that there are people who are very dissatisfied — that this election is not a blank check to do whatever they want.”