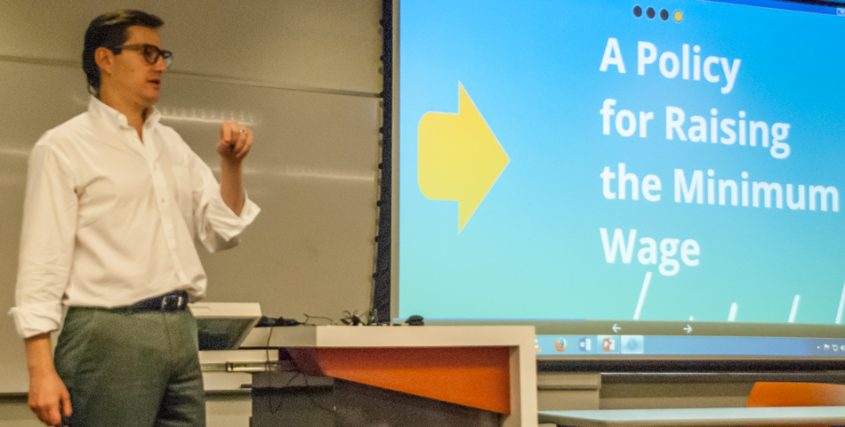 “It’s important to have the skills to make ideas actually happen.”

That was the advice from Salomón Chertorivski Woldenberg, Mexico City’s Secretary of Economic Development, speaking to UCLA Luskin students during an April 6 presentation at the Luskin School of Public Affairs.

Chertorivski was the keynote speaker at the event, “Minimum Wage, Inequality, and the Challenges for Public Policy,” organized by Luskin’s Global Public Affairs and Department of Public Policy, as well as the UCLA Department of Chicana and Chicano Studies, the Latin American Institute and the Center for Mexican Studies.

Focusing on his experiences in Mexico, Chertorivski shared ideas from his book, “De la idea a la práctica,” and explained the challenge of the public policy process. “The magic of public policy is simply implementation,” Chertoivski told the students and others in attendance.

With experience in both the public and private sectors in Mexico, Chertorivski has held various leadership positions, from social, health and educational programs to his current tenure as a key member of the Mexico City governing board. He holds a bachelor’s and a master’s degree in economics, as well as a master’s of public policy.

Urban Planning professor Chris Tilly also spoke at the event, providing comparisons between the U.S. and Mexico on minimum wage and labor unions.

Chertorivski also addressed the issue of minimum wage in Mexico, explaining why it should be raised. “Whenever someone says increasing the minimum wage will increase inflation, it’s  because that’s what happened in the past, but today is completely different.”

Participants were also encouraged to think about how Mexico and the U.S. are similar. Luskin Senior Fellow Michael Camuñez encouraged participants to take what they heard from the event and apply it to today’s controversial rhetoric on Mexico.

“This is about more than the presentation topic,” Camuñez declared. “This is about a relationship, as Mexico and the U.S. share common interests, history and culture.”

Deep Divisions Along Class and Racial Lines in Los Angeles

Examining the Link Between Gun Laws and Suicides
Scroll to top