Two teams of Master of Public Policy (MPP) students from UCLA Luskin were among the top three winners in a recent crisis management challenge. Taking second place at the final presentation stage were second-year MPP student Wenzheng Li and first-year teammates Lin Jia and Jiayu Hu. They also took home a $700 cash prize. The team of Christophe LaBelle, a second-year student, and Brian Harris, a first-year student, won third place, netting $300 in prize money. “This case challenge opportunity demanded that we apply critical thinking, memo writing and presentation skills to a very real-world policy problem facing L.A.,” LaBelle said. “And we enjoyed learning more about resilience, crisis management and the grocery food supply chain in the company of other graduate students and professionals in the field.” Experts from the resilience and emergency management fields evaluated proposals and asked in-depth questions during the Los Angeles Homeland Security Advisory Council (HSAC)/Target Foundation Crisis Management Case Challenge held March 9, 2018, at the University of Southern California. HSAC is a Los Angeles-based nonprofit organization that focuses on preparedness and resilience in the face of natural and human-caused disasters and crises. — Stan Paul

“Experience… there’s nothing like experience and getting out there,” said Riverside Mayor William “Rusty” Bailey MPP ’99, speaking during a recent visit to UCLA Luskin about the most important thing for someone seeking a career in public service. The “Meet the Mayor” event on March 1, 2018, involved a talk about Bailey’s career as a prelude to a Q&A discussion about California economic policy that took place in the California Policy Issues class taught by Michael Dukakis, visiting professor of public policy and former governor of Massachusetts, and Daniel Mitchell, professor emeritus of management and public policy. The mayor and Dukakis talked about issues that included pension and criminal justice reform, as well as the competitive relationship between policy and politics. “When you don’t use your power, people forget that you have it,” Bailey said about his recent move to veto a contract brought before him by the Riverside City Council — a break in tradition from his predecessor, who never used this power. Public service, the mayor added, is not a career sector for applicants solely seeking greater wealth, but instead must remain a path for qualified employees who actively pursue what is best for the communities they serve. Bailey even offered his own office as a location for interested students to seek an internship to acquire more experience in politics and policy. The next morning, Bailey joined other UCLA Luskin alumni and students at the monthly First Fridays coffee mixer in downtown Los Angeles. — Aaron Julian 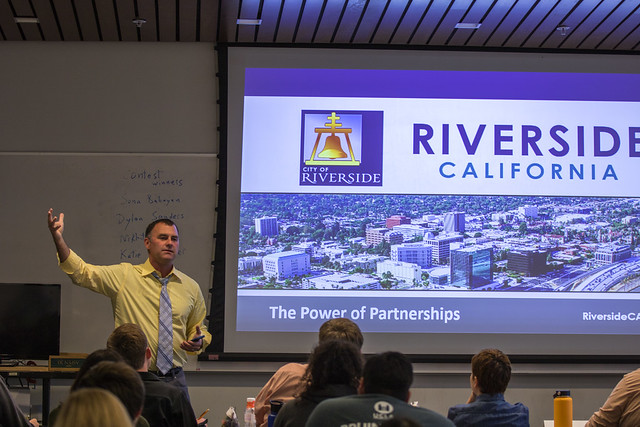 UCLA’s Latino Policy & Politics Initiative (LPPI) has wasted little time in getting its message to the public and elected officials who serve California since it officially launched in December. Part of that process was a trip to Sacramento Feb. 8-9, 2018, during which over half a dozen members of the LPPI team visited legislators and their staffs, and presented applied policy research before the California Latino Legislative Caucus. Under the guidance of  UCLA Luskin Dean Gary Segura, UCLA Government and Community Relations and LPPI have embarked on a collaborative effort to promote faculty research and innovations. “LPPI was created to close this gap in both research and attention to the needs of ethnic minorities and low-income Californians,” said Sonja Diaz, LPPI executive director. “That being said, there are very important policy considerations, challenges and opportunities taking place nationally, so LPPI at this point is focused on state and local government innovation.” LPPI’s inaugural Sacramento legislative briefing included research on three policy areas: the Latino Gross Domestic Product; Criminal Justice and Bail Reform; and the impact of Social Science Research on DACA litigation. David Hayes-Bautista, director of the Center for the Study of Latino Health and Culture at the Geffen School of Medicine, presented on the Latino Gross Domestic Product, which established that U.S. Latinos are the seventh largest GDP in the world, if they comprised their own country. Otto Santa Ana and his team focused on the way that social science research can impact American legal jurisprudence in the two Deferred Action for Childhood Arrivals (DACA) cases in New York and California. Kelly Lytle-Hernandez, interim director of the Ralph J. Bunche Center for African American Studies, presented on criminal justice issues, with the help of UCLA Luskin students Sofia Espinoza and Isaac Bryan. “As researchers, we can provide them with cutting-edge research relevant to the most pressing issues of our time. At Million Dollar Hoods, for example, we are researching disparities in the criminal justice system, providing an unprecedented look at the staggering costs of hyper-policing and over-incarceration in low-income, Black, and Latino communities,” Lytle-Hernandez said. 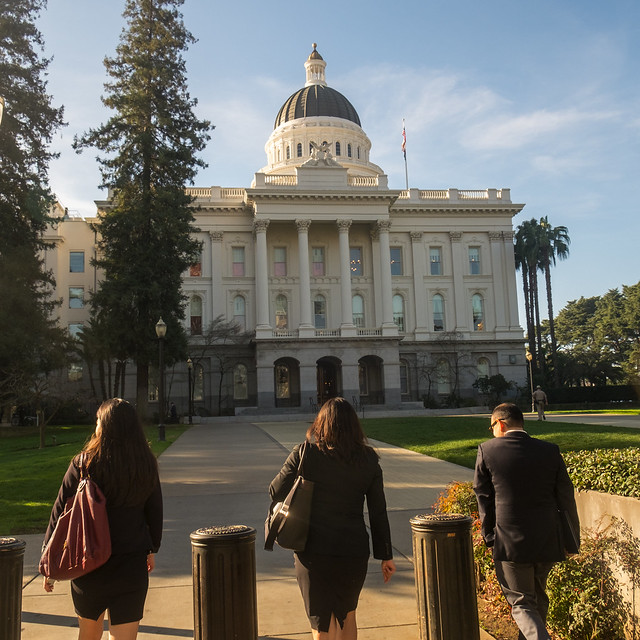 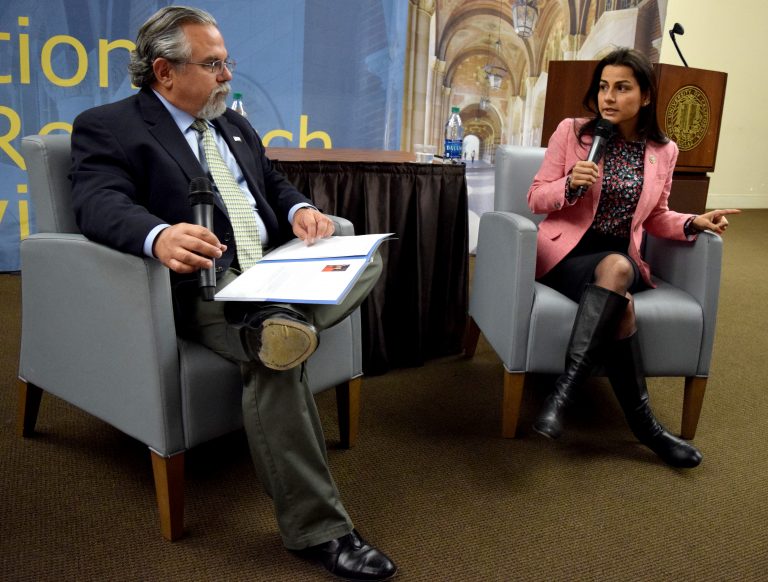 Recently, UCLA Luskin School of Public Affairs Dean Gary Segura moderated a discussion with U.S. Rep. Nanette Barragán, who was a public policy minor during her time at UCLA. “You’ve gone onto a pretty distinguished career already, even though you are just starting out in Congress,” he noted. The event at UCLA’s James West Alumni Center was hosted by UCLA Government and Community Relations and the UCLA Latino Alumni Association.

A lecture titled, “Why there? Developers’ rationale for building social housing in the urban periphery in Latin America,” took place on Feb. 21, 2018, at the UCLA Luskin School of Public Affairs. Nora Libertun de Duren, who is an urban development and housing expert at the Inter-American Development Bank (IADB), was introduced by Paavo Monkkonen, associate professor of urban planning and public policy. Libertun de Duren has a PhD in urban planning from the Massachusetts Institute of Technology and a master’s in urban design from Harvard University.

View a Flickr album of photos from the lecture. 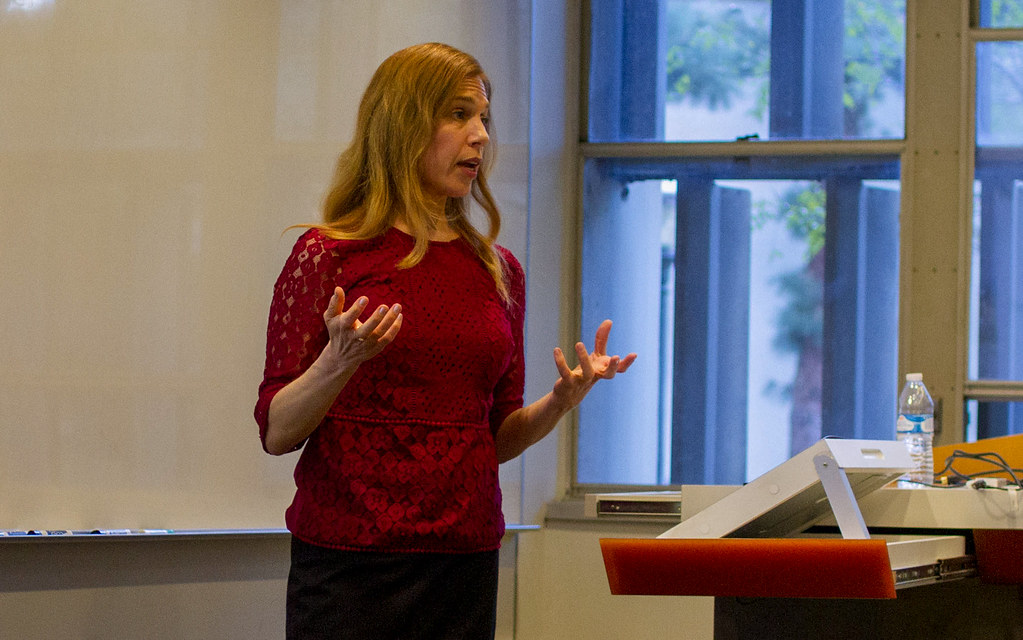 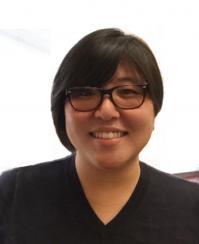 Anna Kim UP PhD ’11 is the Scholar Prize winner for the 2018 William R. and June Dale Prize for Excellence in Urban and Regional Planning. This year’s award theme was based on planning with immigrants in communities and regions. Kim’s research was conducted in her role as an assistant professor of housing and community development at Georgia Tech. According to a story on the university’s website, she examined the blurred boundaries between informal and formal jobs for low wage immigrant workers, and how these semi-formal employment arrangements translate into strategies for local economic growth in ethnic neighborhoods. Her studio course projects include work in the greater Atlanta area and supports efforts to understand immigrant communities. “I’m proud to see how passionate planners are about planning with and for diverse communities and making sure that all voices are heard,” Kim said in the Georgia Tech story. The Dale Prize is awarded by California State Polytechnic University, Pomona’s Department of Urban and Regional Planning and invites recipients to meet with students and to speak at a two-day colloquium held on campus. Kim will soon be returning to Southern California as a member of the planning faculty at San Diego State University.

“Burnout is very much about how we work, and not only about how much we work,” according to psychologist Alessandra Pigni, author of “The Idealist’s Survival Kit. 75 Simple Ways to Prevent Burnout.” She spoke Feb. 15, 2018, as part of a series of talks sponsored by Global Public Affairs at UCLA Luskin. Pigni talked briefly about her personal experiences, including observing caregivers under extremely stressful conditions while working for several years in combat situations in the Middle East as part of Doctors Without Borders. Pigni also shared insights from her research into burnout, which is the subject of a book and a blog, which is how she first came to the attention of Stephen Commins of the UCLA Luskin faculty, who provided the introduction for Pigni’s talk. Her presentation focuses on identifying the signs of burnout and taking steps to prevent it, which she refers to as the ABCs of burnout prevention: awareness, balance and boundaries, and civility. “C is also for connections — connections with people beyond work. You are not just your job,” Pigni told the crowd. Later, she addressed the concerns of students who are just entering the workforce and may not feel empowered to take action if they find themselves in a toxic workplace. “You will not survive for very long in a work environment that mistreats you,” Pigni said. “You can make it for a few months, if necessary. Otherwise, run a mile if you are being mistreated.” 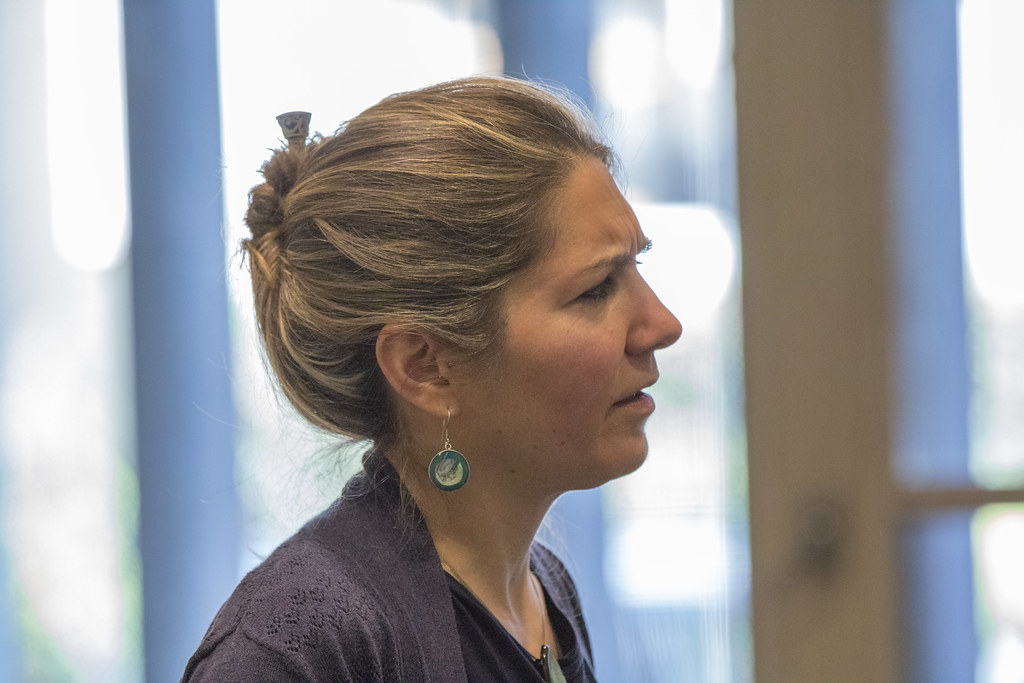