Alternative and affordable housing served as the topic of the 16th annual UCLA Luskin Day on Feb. 21 at Los Angeles City Hall. VC Powe, organizer and executive director of external programs and career services, said 15 students made the trip downtown to discuss this year’s pressing urban social policy issue with city and county leaders. During the day, co-sponsored by UCLA Government and Community Relations, graduate students from all three master’s programs met with Paul Koretz of Council District 5 and heard from Alisa Orduña, senior advisor on homelessness to Santa Monica’s city manager. The students also met with Luskin alumni and broke into teams to interview representatives of local leadership, business and nonprofit organizations that address affordable housing issues in Los Angeles. “The housing issue is definitely something that I came to the program to really try to work and understand a bit more,” said Gerrlyn Gacao, a first-year student studying urban planning. “For me, this experience is about learning first-hand from leaders that are working in the field and throughout the city.” As a first-year social welfare student, Ashley Farnan focuses on seniors. “I’m waking up to the reality of the rising rates of homelessness among seniors and the total lack of affordable housing. … I recognize that I need to be part of the policy conversation.” Associate Professor Paavo Monkkonen served as faculty advisor for the day and will work with students to provide a written memorandum on ways to fund homeless or permanent supportive housing based on the stakeholder interviews. 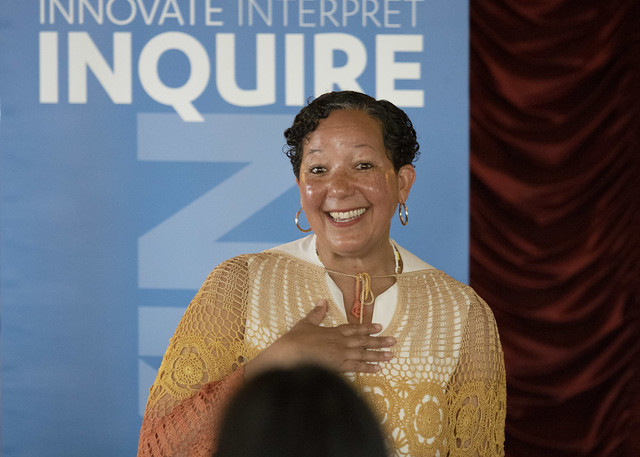 An opinion piece in the Los Angeles Times juxtaposed a Southern California Association of Governments (SCAG) plan to meet housing construction requirements with recommendations from Paavo Monkkonen, associate professor of urban planning and public policy. Gov. Gavin Newsom promised to combat the affordable housing crisis in California with construction of 1.3 million new units of housing. The op-ed, written by the managing director of Abundant Housing L.A., accused the SCAG plan of “disproportionately dumping housing into the sprawling exurbs” while leaving wealthy cities with massive job pools alone. Critics say the SCAG plan will create a housing and jobs imbalance that will lengthen commutes and lead to an increase in greenhouse gas emissions. Working with Monkkonen, Abundant Housing L.A. researchers built a different model for distributing housing requirements that minimizes sprawl, prioritizes accessibility to transit and creates affordable housing where people want to live and have opportunities to work, the op-ed said.

Paavo Monkkonen, associate professor of urban planning and public policy, spoke to Curbed LA about the availability of affordable housing for moderate-income people in Los Angeles. Many residents must pay a burdensome price for shelter yet do not qualify for affordable housing because their annual income surpasses the $56,000 threshold. The Los Angeles City Council voted to examine why there is a shortage of housing options for these people. Monkkonen argued that studying the restraints on moderate-income housing development could lead to city policies that make it easier to develop more housing in the city. He said policymakers and the public believe only certain types of housing need to be built. More housing in general is needed, he said.  “All multifamily housing getting built quicker would help everyone, including middle-income residents,” he says.

Paavo Monkkonen is Associate Professor of Urban Planning and Public Policy at the UCLA Luskin School of Public Affairs, director of the Latin American Cities Initiative, the coordinator of the Regional and International Development Concentration, and a Faculty Cluster Leader for the Global Public Affairs Initiative. Paavo researches and writes on the ways policies and markets shape urbanization and social segregation in cities around the world. His scholarship ranges from studies of large-scale national housing finance programs to local land use regulations and property rights institutions often not recognized for their importance to housing. Past and ongoing comparative research on socioeconomic segregation and land markets spans several countries including Argentina, Brazil, China, Hong Kong, India, Indonesia, and the United States. Paavo continues to work as a consultant on national housing and urban policy in Mexico, where he has various long-term research projects.

At UCLA Luskin, Paavo teaches courses on housing markets and policy, applied microeconomics, research methods, and global urban segregation. He recently launched the Latin American Cities Initiative, Ciudades, an effort to develop and deepen knowledge networks among students, educators, and professionals in the arena of urban planning and policy in South, Central, and North America. One of the initiative’s core components is an international planning studio in Latin America (past studio reports available here).

Professor Monkkonen’s research has been published in journals such as the Journal of the American Planning Association, the International Journal of Urban and Regional Research, the Journal of Urban Economics, Regional Science and Urban Economics, Urban Studies, World Development, and the Journal of Peasant Studies. In recent years, he has received research funding from the John D. and Catherine T. MacArthur Foundation, the Urban Land Institute and LA Metro, the Regional Studies Association, the Lincoln Institute of Land Policy, and the UC Berkeley Terner Center for Housing Innovation. Examples of current projects include a comparative analysis of socio-economic segregation in over 600 cities in 13 countries, a comparison of how higher levels of government shape planning processes in California and Mexico, and a study of inertia in land markets through the evaluation of unbuilt zoned capacity in California’s urban areas.

Where are property rights worth more? Assessing variation in the value of deeds across cities in Mexico
Monkkonen, Paavo. 2016.
World Development, 88, 67-78.

Land Use Regulations and the Value of Land and Housing: An Intra-Metropolitan Analysis
Kok, Nils, Paavo Monkkonen and John M. Quigley. 2014
Journal of Urban Economics, 81(3): 136–148.

Paavo Monkkonen, associate professor of urban planning and public policy, spoke to the Los Angeles Times about a state requirement that Southern California cities and counties plan for the construction of 1.3 million new homes in the next decade. The Southern California Association of Governments — which had proposed zoning for just 430,000 new homes during that period — must now determine how to fulfill the commitment in neighborhoods across Los Angeles, Orange, Imperial, Riverside, San Bernardino and Ventura counties. Monkkonen argued for new housing in places where the demand is highest, such as Los Angeles’ Westside and other areas with strong job growth. To do otherwise would be “a travesty of planning,” especially given recent efforts to increase penalties on local governments that do not comply. Monkkonen said it’s unclear whether the law, which requires zoning for new housing but does not guarantee that the construction will take place, will have a significant effect on the region’s housing shortage.

Curbed LA spoke with UCLA Luskin’s Paavo Monkkonen about efforts to provide affordable housing in every part of Los Angeles. City planners have been instructed to develop recommendations that require all neighborhoods to help meet L.A.’s affordable housing goals.  One option is “inclusionary zoning,” which would require new residential developments to include units that low-income renters can afford. Some developers argue that this policy would dissuade them from building new housing in the city. Monkonnen, associate professor of urban planning and public policy, said inclusionary zoning would be a good start. But he added that it would not have much impact on single-family neighborhoods with little land zoned for multi-family buildings. “A better idea would also be to rezone a lot of land for multi-family and combine it with inclusionary zoning,” Monkonnen said.

Paavo Monkkonen, associate professor of urban planning and public policy, laid out the high stakes of an upcoming reassessment of the region’s housing needs in an editorial for Urbanize Los Angeles and a conversation on LA Podcast. California cities are required by law to increase housing stock to accommodate population growth, based on a Regional Housing Needs Assessment (RHNA) conducted every eight years. In the past, the process has created anomalies like the “Beverly Hills loophole,” which allowed Beverly Hills to zone for just three housing units while the city of Imperial, with a smaller land area, half the population and lower income levels, was assigned 1,309 units. In the podcast, beginning at minute 54:40, Monkkonen explained RHNA’s history and next steps and spoke about the differing interpretations of “fairness” in allocating housing. He urged the public to engage with the Southern California Association of Governments to insist that the next round of assessments meet social and environmental goals.

Read the editorial
Listen to the podcast