Associate Professor of Public Policy Chris Zepeda-Millán was featured in an Independent article discussing the deadly consequences of U.S. border policy. A recent photo of a Border Patrol agent carrying a migrant to safety in the Rio Grande Valley highlights the dangers of crossing the U.S.-Mexico border, especially in the excessive heat of summer. As of May, the Border Patrol has rescued more than 7,000 people this fiscal year, more than the same period in previous years. By tightening security at more common points of entry, U.S. border policy is explicitly designed to push migrants into dangerous, remote areas to deter further crossings. “The most devastating effect will undoubtedly be the increasing number of migrant deaths as they get pushed further and further into dangerous deserts and isolated mountain areas,” Zepeda-Millán said. “That’s literally our stated policy.” Most adult migrants who make it across the border are immediately deported without a chance to seek asylum.

Associate Professor of Public Policy Chris Zepeda-Millán spoke to the Independent about the state of the U.S.-Mexico border wall as President Trump nears the end of his fourth year in office. Trump had promised to build a wall spanning the entire border; as of mid-October, about 370 miles of border barriers had been erected. At around $15 billion for the total project, it is projected to be the most expensive wall ever built, the article noted. After a decline in migrant apprehensions in late 2016 and 2017, immigration and apprehensions spiked again after the wall was slow to materialize. This contributed to an increase in the number of migrants who died while crossing the border during the first three years of the Trump administration. “The most devastating effect will undoubtedly be the increasing of migrant deaths as they get pushed further and further into dangerous deserts and isolated mountain areas,” Zepeda-Millán said. “That’s literally our stated policy.”

“Walls, Cages, and Family Separation: Race and Immigration Policy in the Trump Era,” a new book co-authored by Associate Professor of Public Policy Chris Zepeda-Millán and University of Washington Associate Professor Sophia Jordan Wallace, takes a closer look at the evolution of U.S. immigration policy leading up to and during the presidency of Donald Trump. Published by Cambridge University Press, “Walls, Cages, and Family Separation” examines the “deeply racist roots” of U.S. immigration policy, which have been exacerbated by the Trump administration’s racially charged rhetoric and policies, including the border wall, migrant family separation and child detention measures. Zepeda-Millán and Wallace point to Trump as the “most blatantly anti-Latino and anti-immigrant president in modern American history” and examine the factors motivating his support base. Their research shows that resentment and fear among whites who feel culturally threatened by Latinos motivates them to support Trump’s immigration policies. They examine how support for immigrant detention and the wall has shifted over the duration of Trump’s presidency, as well as the stereotypes and misinformation that play a role in public perception of immigrants and immigration policy. While Trump’s immigration policies have been widely criticized and are unpopular with many Americans, Zepeda-Millán and Wallace argue that Trump is relying on his ability to “politically mobilize the most racially conservative segment of whites who back his draconian immigration enforcement measures” in his bid for reelection. “Walls, Cages, and Family Separation” is Zepeda-Millán’s second book, following his first release, “Latino Mass Mobilization: Immigration, Racialization, and Activism.”

An overwhelming majority of Americans oppose the Trump administration’s practice of threatening people who provide humanitarian aid to undocumented immigrants at the U.S.-Mexico border with arrest and a possible 20-year prison sentence, according to a new UCLA policy brief. The brief, published by the Latino Policy and Politics Initiative (LPPI), cites a 2019 survey of 1,505 Americans that asked participants, “Do you agree or disagree that it should be a crime for people to offer humanitarian aid, such as water or first aid, to undocumented immigrants crossing the desert along the U.S.-Mexico border?” Eighty-seven percent of those surveyed said they disagreed — including 71% of Republicans — highlighting the unpopularity of the policy. “Our survey showed that an overwhelming number of Americans across political parties agree that no one should face jail time for being a good Samaritan,” said LPPI member Chris Zepeda-Millán, an associate professor of public policy who conducted the survey with Sophia Wallace of the University of Washington. The policy brief, authored by Zepeda-Millán and Olivia Marti, a Ph.D. student in UCLA’s political science department, recommends legislation that would halt current efforts to criminalize border relief and calls for an end to the destruction of humanitarian supplies by U.S. Border Patrol agents. Currently, the agency only counts fatalities discovered by its own agents; the UCLA report suggests that the fatality count also include bodies identified by local government officials, medical examiners and nongovernmental organizations. — Eliza Moreno

Associate Professor of Public Policy Chris Zepeda-Millán spoke to AP News about the long-term impact of protests. Studies estimate that over 15 million Americans have taken part in demonstrations decrying racial injustice following the death of George Floyd. While it’s too early to gauge the impact of current protests, a look at the history of U.S. activist movements — including calls for women’s suffrage and civil rights — highlights the victories that have been achieved through protesting. Zepeda-Millán weighed in on a 2006 bill seeking to classify undocumented immigrants as felons and penalizing anyone who assisted them. The bill was shut down in the Senate after millions turned out to protest against it. Zepeda-Millán credits the protests for both stopping the bill and encouraging voter registration among Latinos. However, he said the protests also intensified congressional polarization, dimming prospects for any immigration overhaul and citizenship for undocumented immigrants.

Associate Professor of Public Policy Chris Zepeda-Millán was featured in a Conversations with Changemakers interview about public opinions surrounding the current administration’s immigrant detention policies. He explained that “even before the COVID-19 pandemic occurred, jails, prisons and detention centers already had pretty bad conditions,” including poor sanitation, cold temperatures, inadequate medical care and dangerous overcrowding. Zepeda-Millán suspects an undercount in COVID-19 cases in detention centers, noting that only 1% of detainees had been tested but 60% of those tested positive for the virus. Before the pandemic started, one survey found that the public overwhelmingly rejected detaining children and preferred releasing immigrant children to family members or sponsors instead. Conditions have only worsened since the pandemic started, Zepeda-Millán said, and the public may be even more in favor of releasing detainees now that they know how the pandemic is spreading among incarcerated populations.

Associate Professor of Public Policy Chris Zepeda-Millán was featured in a New York Times article about the role that Latinos have taken on in the Black Lives Matter movement. Both Black and Latino communities have been affected by police violence and systemic racism, even though the national focus of ongoing protests has chiefly been about the impact on Black Americans and the ways white Americans are responding to it. A recent poll by the New York Times and Siena College found that 21% of Hispanic voters said they had participated in Black Lives Matter protests, nearly identical to the 22% of Black voters who said they had done so. “Many Latino youth, they are making the connection, they are pressing their families to have difficult conversations,” Zepeda-Millán explained. For many liberal Latino activists, the Black Lives Matter movement and current wave of protests serve as a model and an inspiration.

About 30 undergraduate students from California and beyond convened at UCLA for a weekend of learning and public service, part of the not-for-profit Public Policy and International Affairs (PPIA) program. UCLA Luskin Public Policy hosted the program, “Advancing Social Justice Through Public Service: Lessons From California,” with senior lecturer Kenya Covington coordinating a full weekend of lectures, conversations and off-campus experiences. Students ventured out to MacArthur Park west of downtown Los Angeles, the Crenshaw District and the office of Los Angeles County Supervisor Sheila Kuehl to hear how policymakers are grappling with homelessness and gentrification. They heard from several MPP alumni from both the policy field and academia, and learned about public service career paths from Dean Gary Segura and other UCLA Luskin staff. Several members of the public policy and urban planning faculty shared research, insights and data-gathering techniques during the Oct. 4-6 event, including Amada Armenta, Kevin de León, Michael Lens, Michael Stoll and Chris Zepeda-Millán. Public Policy Chair JR DeShazo encouraged the students to engage intellectually, socially and emotionally as they explored policy challenges and prepared to make an impact in their own careers. The students formed working groups to synthesize what they had seen and heard, and presented their findings at the close of the program. Joining the large contingent of students from four-year and community colleges in California were participants from Arizona, Illinois, Michigan and Washington. The public service weekend was one of several outreaches around the country that are coordinated through PPIA to promote diversity in public service.

View photos from the PPIA public service weekend on Flickr. 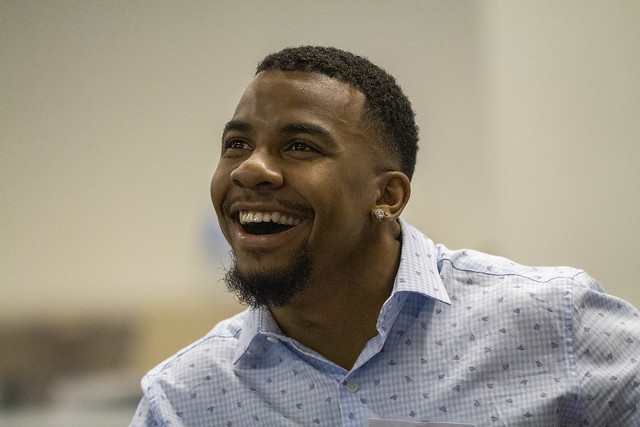 Chris Zepeda-Millán, associate professor of public policy, spoke with the Houston Chronicle about a campaign strategy shift by Beto O’Rourke. Since the Aug. 3 mass shooting in his hometown El Paso by a man who warned of a “Hispanic invasion of Texas,” the Democratic presidential hopeful has focused his message on racist violence, and held President Trump accountable for stoking it. This may be an attempt to jumpstart O’Rourke’s lagging campaign or set himself up as a vice presidential pick, some analysts said. “There’s nothing about him anymore that stands out,” Zepeda-Millán said. “He’s not a person of color, he’s not a woman, he’s not the most progressive candidate by far. He doesn’t have anything to set himself apart.” Zepeda- Millán concluded: “This is kind of a last effort to stay relevant.”