At the end of the medal event, Dean Gary Segura joined Jorge Ramos in urging students to take out their phones and share a get-out-the-vote message via social media. Photo by Les Dunseith

In recognition of his journalistic accomplishments and his leadership on social issues, Jorge Ramos, the longtime host of Univision Noticias’ evening news and its Sunday newsmagazine “Al Punto,” has been awarded the UCLA Medal.

“Jorge Ramos is more than a great journalist who happens to read and report the news to a largely Spanish-speaking audience,” Block told a crowd of about 400 people prior to Ramos delivering the latest Luskin Lecture, which is sponsored by the UCLA Luskin School of Public Affairs. “He is also a fierce advocate for Latino immigrants.”

Ramos studied journalism at UCLA Extension when he first came to the United States from Mexico.

“Journalism and academia really are kindred spirits in that we both are dedicated to honestly searching for and sharing reliable facts,” Block said. “This is why UCLA is so grateful for journalists like Jorge Ramos.”

A pivotal figure for many American Latinos, Ramos has more than 30 years of experience producing informative reporting with an underlying dedication to advancing the interests of marginalized communities. 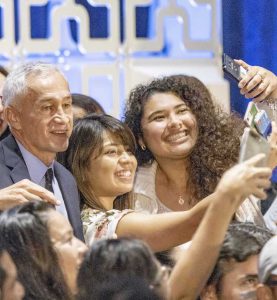 Students engaging with Jorge Ramos are inspired by his words and warm personality. Read the story. Photo by Les Dunseith

“Regardless of whatever happens [in the midterm elections] this November, there is an incredible demographic revolution happening right now,” Ramos told the crowd at the UCLA Luskin Conference Center. “By 2044, everyone in this country — absolutely everyone — is going to be a minority.”

Ramos said he believes that many conservative voters are afraid that their country is changing so quickly that they won’t be able to recognize it. But in Ramos’ view, “the beauty of this country is its diversity. And the only way to survive is to be tolerant and to respect our differences.”

Tom Oser, interim vice provost of UCLA Continuing Education and Extension, also placed an emphasis on inclusiveness in his remarks. “Mr. Ramos’ story of personal reinvention highlights what Extension does best. We offer open enrollment into academic certificate programs of study that provide access to the riches of UCLA academics — to all adults.”

UCLA played an essential role in his career, Ramos told the crowd.

Ramos was selected to give a Luskin Lecture at UCLA because the series often “celebrates the inspirational work of individuals like Jorge Ramos whose accomplishments in service to the public interest can serve as models not just to our students but, indeed, to us all,” said Gary Segura, dean of the UCLA Luskin School of Public Affairs. “Mr. Ramos is the living embodiment of journalism in the pursuit of justice, the most trusted man in Latino America, and I am proud to know him.”

Those who attended the event shared Segura’s excitement about the opportunity to spend time in the presence of Ramos.

“Every immigrant remembers the date when they arrived. For me, it was Aug. 8, 1993. And, where we lived near Miami, Jorge was in our living room every single night,” said Dulce Vasquez, a first-year master’s degree student in public policy. “From a very young age, I knew that he was a very trusted source of information and a welcome voice in our household. To this day, I have not found a more trusted and reliable voice in the Latino community.” 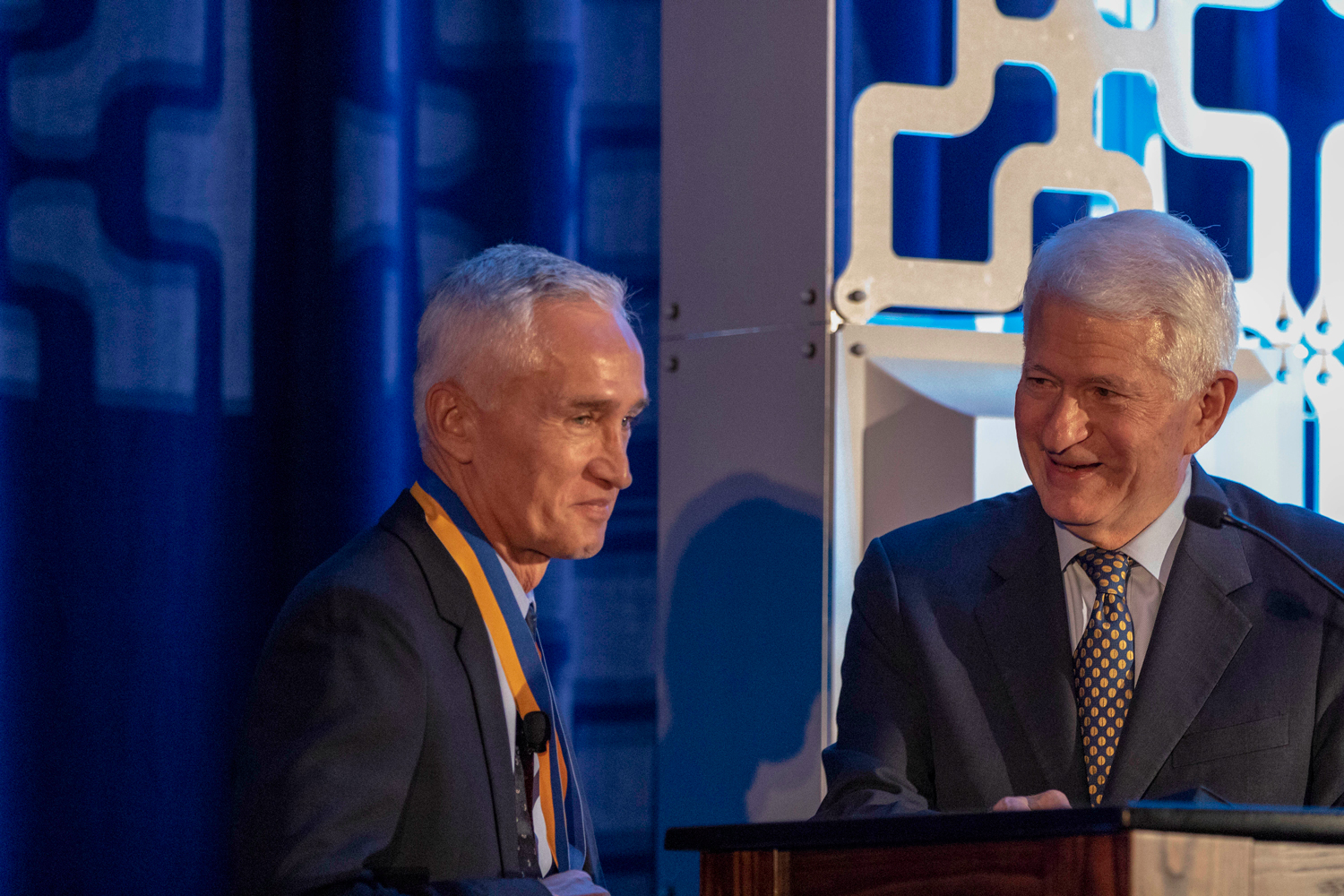 The proclamation accompanying the UCLA Medal awarded to Jorge Ramos by Chancellor Gene Block recognizes Ramos as one of America’s leading journalists and “a critical voice and source of information for millions here and abroad.” Photo by Stan Paul 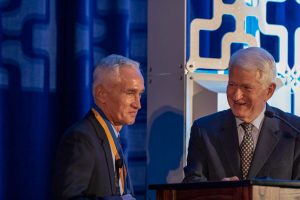 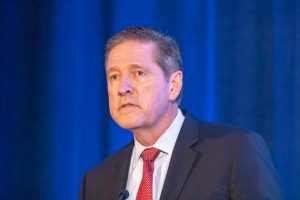 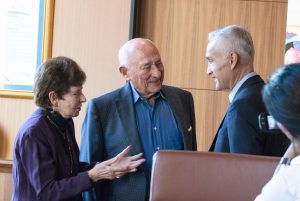 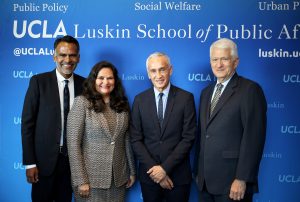 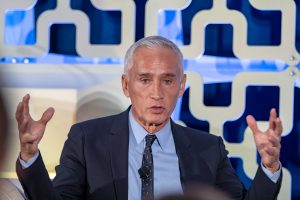 After the medal presentation, Ramos made brief remarks, then engaged in a discussion of issues of national interest with Eric Avila, UCLA professor of Chicana and Chicano studies, history and urban planning; and Laura Gómez, UCLA professor of law.

Avila asked whether the rules have changed for journalists in the current political climate. Ramos, who quit his reporting job in Mexico 30 years ago to escape censorship and pursue his livelihood in a country with greater press freedom, replied that journalists have a societal obligation to do more than simply relay facts.

He recounted his well-remembered 2015 confrontation with then-presidential candidate Donald Trump. During a news conference at a campaign stop in Iowa, Trump refused to let Ramos ask a question about immigration policy. He stood his ground and refused to be silent, so Trump had security personnel usher Ramos out of the room.

“In journalism school we are taught that we need to be neutral. But after that moment, I realized that neutrality sometimes is not an option,” Ramos said. “Elie Wiesel, a Holocaust survivor, used to say that we have to take a stand. Neutrality helps the oppressor, never the victim.”

Ramos’ remarks included an admonition directed toward the many UCLA students who attended the event, telling them to speak out — to disobey.

Stan Paul of the UCLA Luskin communications staff also contributed to this story.

View a video from the event:

View additional photographs from the Luskin Lecture and a dinner with Ramos that followed on Flickr: 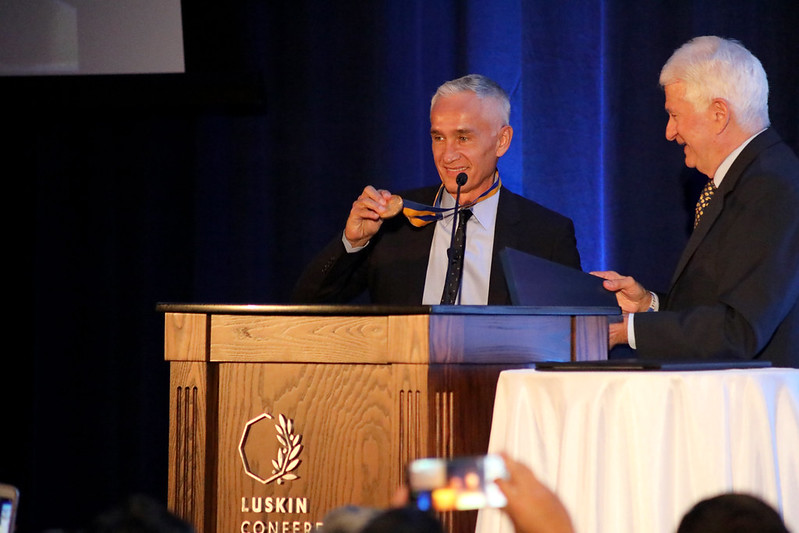