Downtown Los Angeles is being revitalized with a wave of new construction. But the emphasis on high-rise towers with spectacular views is not a model that works well in other parts of the city. Photo by Thomas R. Shrout Jr.

“In Los Angeles, we do have a rather broken planning system,” Michael Lens, an assistant professor of urban planning, said during an interview after the defeat of a controversial ballot initiative, Measure S, that had sought to clamp down on Los Angeles development.

Lens and other UCLA Luskin faculty members with expertise in housing density, land use and the related issues of home affordability and transportation say Measure S reflected long-simmering dissatisfaction with how vital decisions about growth, density and housing affordability are made. And they hope increased public awareness will lead to positive change in the state’s planning process. 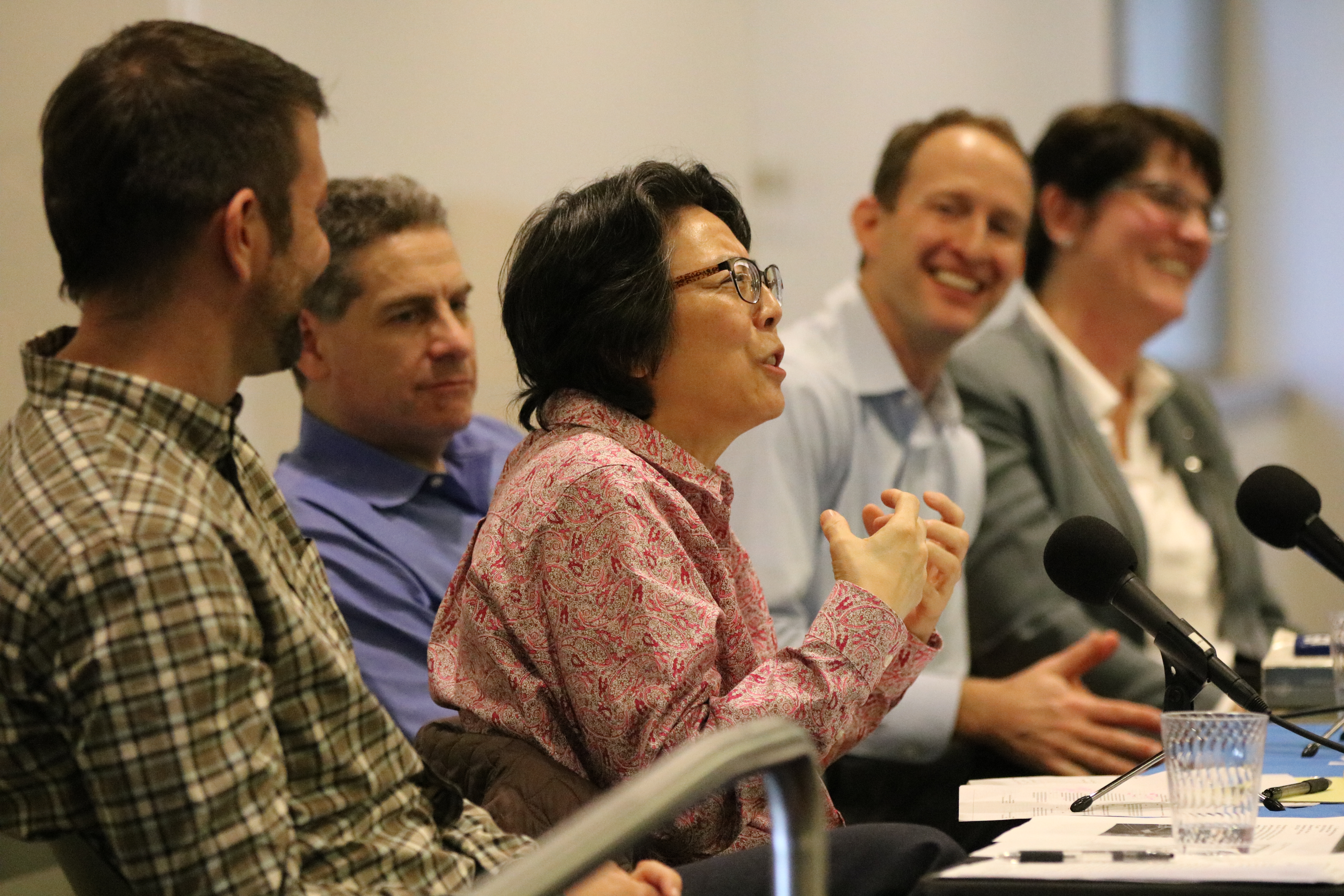 “L.A. has a very low-density zoning law,” explained Michael Manville MA ’03 PhD ’09, an assistant professor of urban planning at UCLA Luskin. “Its general plan is set up for the city as it was 40 years ago. The zoning never caught up with the fact that L.A. became much more urban.

“Now, as a result, in many parts of the city, to build any kind of housing that we actually need — multifamily housing — it’s illegal.”

That means that a zoning exception must be granted for large housing projects, which leads to often-protracted negotiations between developers and members of the L.A. City Council.

The current process often frustrates citizens, but the benefits to select policymakers and large real estate developers get in the way of reform efforts, Manville noted.

“Developers who can afford to play the game like it,” Manville said, noting that although they must wait as long as a year to start building on land that is sitting unused during negotiations, the developers end up with the “right to build extra units in a very hot property market. And that probably means more profit.”

“One of the main things I learned in writing the white paper is that nobody likes new development near them,” Monkkonen said.

The result is a Catch-22 that squeezes the general public from both directions, leaving the average L.A. resident with a choice between paying high rent or seeking a risky loan to buy a home they really can’t afford.

‘A City Can Only Sprawl So Far’

A look at the population and housing numbers for Los Angeles clearly illustrates the problem, said UCLA Luskin’s Joan Ling MA UP ‘82, a longtime lecturer in urban planning who has deep experience in real estate analysis and affordable housing. She cited a study by Greg Morrow PhD ’13. “In 1960, there were 2 million people living in the City of Los Angeles, and the zoning capacity was set for 10 million people. In 2010, the city’s population was 4 million people, but the zoning capacity had been reduced to 4.3 million. So, in fact, we had enough zoning capacity for only 200,000 to 300,000 in additional growth.”

“So where are these people going to go?” Ling asked. “That’s the real problem.”

California has enticing natural features. But most areas are unsuitable for human occupation, or the land is already used by industry or agriculture.

“A city can only sprawl so far,” Ling explained, noting that traffic in Southern California has become a daily nightmare for many people.

The NIMBY (not in my back yard) syndrome is an ever-present issue in California, Monkkonen said. When a new, higher-density project is proposed almost anywhere, neighborhoods rise up to block it. “So this is what happens when we have built horizontally to the fringes of the metropolitan area as much as commute times will allow — we get traffic jams and a lack of affordable housing,” he explained.

California’s flawed system of zoning effectively blocks housing affordability, according to several faculty members in the Department of Urban Planning. For example, Monkkonen noted that condos are much cheaper to build and thus much more affordable than single-family homes, but condos “are illegal in 75 percent of L.A. Effectively, using the power of the state, we have prevented the majority of the people in the U.S. and the majority of the people in L.A. from ever buying a home.”

The state’s love of automobiles and its idyllic notion of cul-de-sac suburbs — the California Dream itself — is part of the problem.

“People come here with a certain picture of Los Angeles,” Lens noted. “A place with yards. A place where you have the freedom to get in your car and go where you need to go.”

‘A Horrible Place to Walk or Bike’

“L.A. has pulled off this amazing trick, where you have a city in which large portions are relatively flat, where the weather is always nice, and it’s a horrible place to walk or bike,” Manville said.

A denser neighborhood, if it’s designed carefully, becomes a more pleasant place to walk and live. Manville points to London, which embraced the idea that to manage its congestion, it needed to charge people to drive.

“If you actually do something that makes congestion better — which is what charging does and nothing else does — then you can knock down a lot of the concerns about more density. And a lot more good things can flow from that,” Manville said.

The congestion toll in London has added housing and allowed transportation authorities to “take back a lot of the space that had previously been allocated to cars,” Manville said. “There are just so many more sidewalks and bicycle lanes and lanes dedicated to buses that make the transit go much faster.”

Monkkonen points to Vancouver, Canada, as another potential model for Los Angeles. “It’s a place where single-family home neighborhoods have had the density increased without changing how it looks. In Vancouver, they have a basement unit, a ground-level unit and a second-floor unit. They look like single-family homes, but there are actually three households there.”

The only way to handle a constantly growing population, Monkkonen argued, is to set aside our neighborhood-based ideals and look at the region as a whole.

Like her colleagues, Ling sees the need to increase housing density in Los Angeles, but it is “equally important to require that this density be coupled with inclusionary zoning.
A proportion of this extra density must be built as affordable housing.”

In downtown Los Angeles, a boom in construction has brought gleaming new high-rises along with a handful of medium-density projects. Most people think downtown is better now, Ling said, but it’s not a model that works throughout the city.

A Tipping Point for California?

Where, then, should the new housing be built?

“That’s the question,” Ling said. “Where are we going to put it? If this planning was rational, we would put them where the density is most-suited, where people most want to live. But, in reality, issues like this are very much decided on the local level, neighborhood-by-neighborhood, district-by-district.”

In Monkkonen’s view, the best chance to solve California’s housing crisis lies at the state level. In his white paper, he says the state should take action by enforcing and enhancing existing laws, developing ways to make planning decisions at a metropolitan, not neighborhood, scale.

“As long as cities decide within their boundaries where to put the housing, it will work,” Monkkonen said of the idea. “The state would just say, ‘You must have housing,’ and enforce the rules if cities do not comply.”

The state has had rules on the books for 40 years to promote the creation of new housing, but they are rarely enforced. Perhaps California has reached a tipping point that would make state action more feasible?

“Oregon gets a lot of attention in planning scholarship,” Manville said. “They do have a very strong statewide land use program, where the state plays a very active role.”

California could do it too, even in places where resistance would be strong.

These ideas — stronger statewide leadership, looser zoning laws, smarter growth, improved transit, denser housing — are viewed by the UCLA Luskin faculty members as essential changes. Despite the disenchantment that spawned Measure S and similar outcries over growth, they remain generally upbeat about the region’s prospects for a more livable future.

In 20 years, Ling said, “I hope we would live comfortably and closely together, in a city were we don’t need to drive anymore because there will be autonomous cars that move us from our house to the transit station. I’d like L.A. to look like many of the arrondissements in central Paris, filled with six-story buildings in a walkable neighborhood.

“That’s what I would like to see. And we have to believe that it’s possible,” she said, pausing a moment to consider what may happen if the advice of planners like her continues to go unheard. “Otherwise, it could be very bad.”

A Final Test for Policy Analysis Projects
Scroll to top