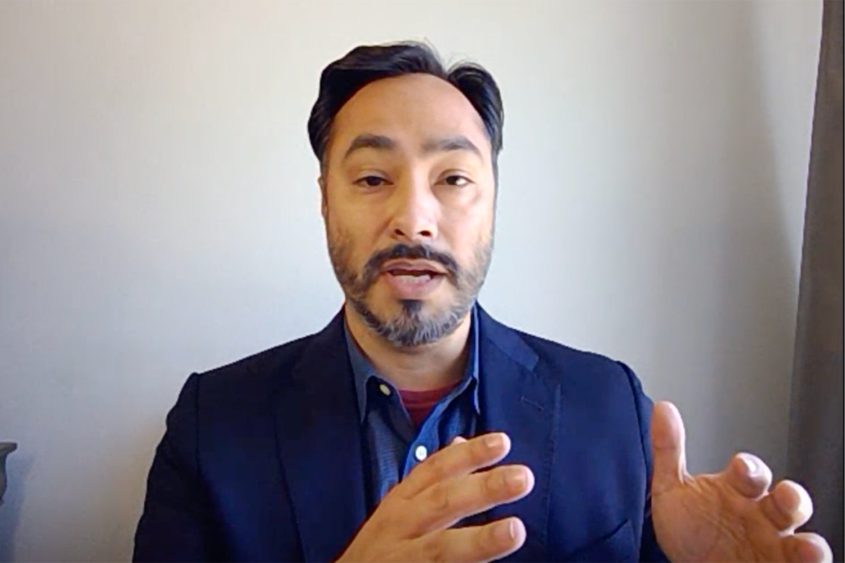 U.S. Rep. Joaquin Castro kicked off a webinar that also included a panel discussion with scholars and political experts regarding U.S. immigration policy.

By Kassandra Hernandez and Les Dunseith

U.S. Rep. Joaquin Castro of Texas sees Democrats in power in Washington, D.C., and thinks the time may finally have arrived for comprehensive reform of U.S. immigration policy.

“It’s not very often that Democrats have control of the presidency and both chambers of the Congress,” Castro said during a May 4 webinar hosted by the UCLA Latino Policy and Politics Initiative. “There’s a real opportunity here to pass comprehensive immigration reform and put 11 million undocumented folks — many of whom are ‘Dreamers’ or others, like their parents, who have been here for generations — on a path to citizenship.”

Castro, who introduced one of four immigration-related bills currently making their way through the political process in Washington, knows it won’t be easy, given the narrow Democratic majorities in both houses and longstanding GOP opposition to immigration reform that includes citizenship. Still, waiting too long could doom the effort.

As the 2022 midterm elections draw closer, elected officials will become “very cautious about the votes that they take,” Castro noted. “So, there’s got to be a lot of momentum and a big push to get immigration reform done this year.”

Castro’s comments came during a 10-minute live interview with webinar moderator Russell Contreras, a justice and race reporter at Axios, that set the tone for a panel discussion with scholars and political experts focusing on the challenges and opportunities for U.S. immigration reform.

During the interview, Castro spoke about why immigration policy reform is so important to him. He represents a district in the San Antonio area that is home to many Mexican Americans like himself.

“There is a permanent class of conservative politicians … who want to use the immigration issue as a way to scare Americans and make them think that there is a lot of brown people who are going to come into the country and harm them,” Castro said. “But you see Mexican American communities being very favorable toward giving immigrants a path to citizenship because they understand that experience. To them, [an immigrant] was their parent or their grandparent. So, when they hear all of the fear-mongering, most of the time, they don’t buy into that.”

Castro said he hopes an umbrella bill that includes comprehensive immigration reform can be passed during this session of Congress, although it has not yet come to a vote. He noted that two other immigration bills have already made it through the House, however, and he urged the U.S. Senate to move forward with that legislation.

Cecilia Menjívar, a professor of sociology at UCLA who is an expert on immigration issues, argued that such piecemeal reform probably has a greater chance of success. Although the current social and political environment is unlike any in recent history, she said systemic barriers are likely to continue to impede sweeping immigration reform efforts.

Joining Menjívar on the virtual panel were Angélica Salas, executive director of the Coalition for Humane Immigrant Rights, Los Angeles (CHIRLA), and Andrew Selee, president of the Migration Policy Institute. All the speakers agreed that the national stance must recognize the complexities of the issue beyond border security and militarization.

Immigration reform is deeply interconnected with labor rights, access to education, health care and violence in other countries, they noted.

“You can legalize the people in the U.S., but if you don’t deal with the system that keeps us out and kicks us out, then you are not doing service to our community,” Salas said.

The so-called border crisis is actually a regional international policy problem, Selee said. “If you have lots of people coming in an irregular fashion, we need to rethink how we facilitate a legal path to immigration.”

Salas called for an urgent change in enforcement. “The detention system is a for-profit system,” she said. “Too many corporations [make] money off of the detention of our people.”

U.S. immigration policy also needs to account for the economic contributions made by the millions of undocumented workers throughout the country, Selee said.

Menjívar cautioned that immigrants should be recognized in a manner that avoids “reducing them to a dollar sign,” noting the many “social and cultural contributions [immigrants] have made to this country over decades.”

Selee pointed out that almost half of immigrants today have college degrees, representing potential talent that can help catalyze economic recovery in the wake of COVID-19.

“Unlock that potential, [and] it would fit in really well in a moment where we are trying to recover economically,” he said.

View a recording of the webinar