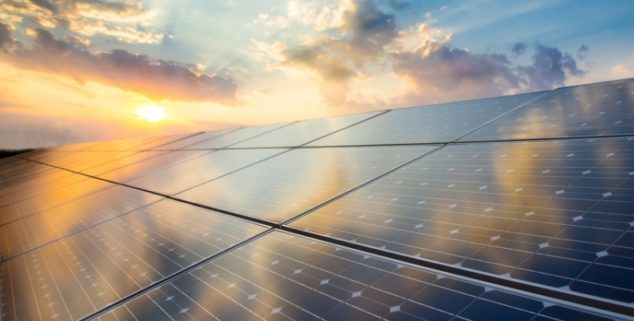 Luskin Center for Innovation Director JR DeShazo and Deputy Director Colleen Callahan co-authored an opinion piece for the Capitol Weekly that explores the rise of clean energy in cities. Dozens of cities and counties in California are already running on 100% clean energy, a transition often spearheaded by local leaders, the authors found. They argued for a statewide move toward clean energy achieved by reforming state and utility policies, modernizing grid operations and increasing grid connectedness. “Local communities are proving possible what once seemed impossible: Cities and counties can run on 100% clean power,” DeShazo and Callahan wrote. “By achieving this goal today, local initiatives can light the way for the rest of the country. They can and should serve as inspiration to other cities, states, and the federal government to support 100% clean energy commitments, and to take bold action to achieve those goals.” 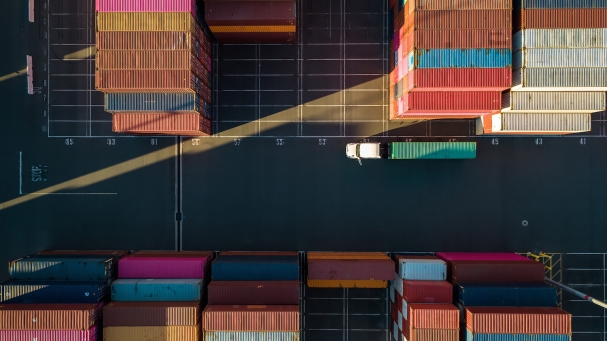 Aerial shot of a shipping yard at the Port of Long Beach. Photo by iStock.com/halbergman

The two San Pedro Bay ports — Los Angeles and Long Beach — form the largest container port complex in North America. While an important economic engine for Southern California, port-related activity is one of the largest contributors to air pollution in a region that regularly violates air quality standards.

Concerned about the public health and climate impacts of drayage trucking — which moves cargo from the ports to train yards, warehouses and distribution centers — the mayors of Los Angeles and Long Beach set a goal to transition the fleet to 100% zero-emission vehicles by 2035. A new report from the UCLA Luskin Center for Innovation, however, finds that an accelerated transition starting in the 2020s could be both feasible and advantageous.

The UCLA researchers analyzed the significant challenges and opportunities of replacing diesel drayage trucks with zero-emission trucks, specifically battery electric trucks, beginning in the 2020s. One advantage of an earlier transition is a quicker reduction in tailpipe emissions, they found. Unlike current diesel trucks, zero-emission trucks do not directly emit any regulated pollutants and can be fueled by renewable energy sources like wind or solar.

However, there are barriers to adoption of battery electric zero-emission trucks by the drayage industry. The UCLA report finds that current constraints include nascent technology not yet proven in drayage operations; limited vehicle range; high capital costs for trucks and charging infrastructure; uncertainty about which entity would shoulder the upfront costs; and space and time constraints for vehicle charging.

“Despite these challenges, we conclude that there is significant potential for zero-emission trucks to be used in drayage service,” said James Di Filippo, the lead researcher on the UCLA study. “Operationally, the range of early-state battery electric trucks is suitable for most drayage needs at the ports.”

“We made a surprising finding: When incorporating incentives and low-carbon fuel credits, the total cost of ownership for a battery electric truck is less than near-zero-emission natural gas trucks,” Di Filippo said. “Even more surprising is that battery electric trucks can even be less expensive than used diesel trucks. This supports our finding that, even in the short and medium term, there is opportunity to electrify a meaningful portion of the drayage fleet at the ports.”

The Clean Trucks Program, adopted by the two ports in 2007, successfully spurred the replacement of the oldest, dirtiest diesel trucks in the fleet with cleaner diesel and natural gas models. UCLA researchers expect another nearly complete turnover of the drayage fleet in the 2020s. This presents a tremendous opportunity to transition to zero-emission trucks.

The UCLA report analyzed other options that the ports could pursue, including investing in technology that allows electric trucks to specialize in routes that suit their range. It also recommends that the ports collaborate with stakeholders — such as utilities and air regulators — to coordinate a wraparound strategy that provides technical assistance to trucking companies and drivers.

Other recommendations target incentives adopted by utilities and air quality agencies, which the researchers said could be updated to meet evolving needs.

The report by the Luskin Center for Innovation, which unites UCLA scholars and civic leaders to solve environmental challenges, was made possible by two separate funding sources: a partnership grant from California’s Strategic Growth Council, and members of the Trade, Health and Environmental Impact Project (THE Impact Project). 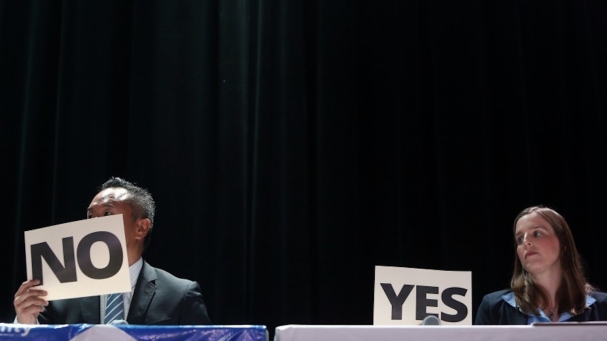 Colleen Callahan, deputy director of the Luskin Center for Innovation, spoke to the Los Angeles Times about an L.A. City Council runoff election that highlights the debate over the “Green New Deal.” John Lee and Loraine Lundquist are vying for the seat representing the northwest San Fernando Valley — site of the massive Aliso Canyon methane leak that pushed thousands of people out of their homes. Lundquist has endorsed Mayor Eric Garcetti’s package of environmental proposals; Lee says the mayor’s plan is too costly, and his supporters have called Lundquist’s agenda “extremist.” The Valley campaign is “a little bit of a microcosm of what’s happening on the national stage around the Green New Deal,” Callahan said. 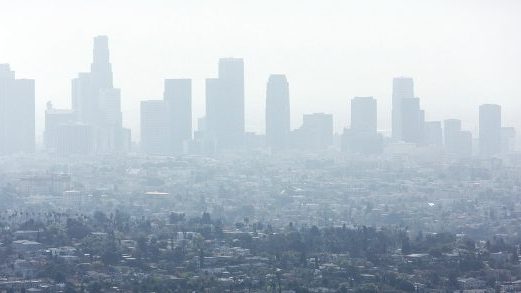 JR DeShazo and Colleen Callahan, the director and deputy director of the UCLA Luskin Center for Innovation, co-authored an article in Capitol Weekly outlining their recommendations for incorporating housing and transportation choice into climate action policy in California. After successfully passing climate action legislation, politicians are now faced with “the enormous task of meeting these goals,” the authors said. They recommend “bundling climate change solutions with initiatives to ease the housing crisis, transportation problems and income inequality” in order to maximize consumer choice. According to DeShazo and Callahan, “all Californians — including members of low-income and vulnerable communities — deserve choice in terms of where they live, where they work, how they move around and how they power their lives.” They conclude with their hopes to “ease housing and transportation burdens while cutting greenhouse gas emissions and expand choice for all Californians.”

Low-income Californians feel the pinch when gasoline, electricity and natural gas prices increase. And it’s logical to think that the state’s Cap-and-Trade program might add to those expenses. But this program is generating billions of dollars to provide an array of benefits to Californians, especially those living in disadvantaged communities.

Now, a first-of-its-kind study by the UCLA Luskin Center for Innovation has found that Cap-and-Trade has produced another very positive result. The study, “Protecting the Most Vulnerable: A Financial Analysis of Cap-and-Trade’s Impact on Households in Disadvantaged Communities across California,” revealed that the state has very effectively put in place measures to mitigate any disproportionate impact that might fall on low-income households.

According to the researchers, protective measures implemented by the state could more than offset Cap-and-Trade compliance costs that are passed on to electricity, natural gas and gasoline consumers.

“As consumers of these three industries, we asked what are the Cap-and-Trade compliance costs for these industries,” said J.R. DeShazo, director of the Luskin Center for Innovation and principal investigator on the project. “What is the cost pass-through from the regulated industries to consumers and what are the strategies to reduce those cost pass-throughs from Cap-and-Trade? And, finally, what is the net financial impact?”

Low-income households inevitably are going to bear a stronger burden from regulation because they pay a higher percentage of their income to electricity and natural gas bills as well as to gasoline. But, according to the study, the state has effectively put in place measures to protect low-income Californians as we transition to a cleaner, lower-carbon economy.

“We actually see that, once you factor in those direct and indirect measures, low-income Californians receive a small but still measureable potential benefit,” said Colleen Callahan, deputy director of the Luskin Center and co-author of the report. “We found that electric utility customers could actually gain $200-250 during our study period, which is the length of the Cap-and-Trade program, through 2020.”

The study also found that low-income households could receive an estimated positive impact of between $44 and $83 as natural gas utility customers.

“And for gasoline customers we are predicting a bigger net benefit,” Callahan said. “We estimate that our representative households could receive a cumulated, indirect benefit of approximately $350 to $700 by 2020.”

“I think it’s been a success because of the way they are implementing various price increase mitigation strategies for consumers, and low-income households especially, along with the Cap-and-Trade program,” Julien Gattaciecca, lead author of the study and a Luskin Center researcher, said. “It is very well made and very well thought-out, and gives the rest of the world a leading path to follow.”

Cap-and-Trade was created in 2012 to reduce greenhouse gas emissions. It requires that the biggest producers of greenhouse gas — including electricity utilities, natural gas utilities and fuel distributors — purchase carbon allowances. The costs of these carbon allowances create price signals that communicate to consumers the amount of GHG emissions associated with electricity, natural gas, and gasoline consumption. “They have to pay to pollute, or they have an incentive to reduce their emissions,” Callahan said.

“It’s a complicated program, but it’s an important one,” she added. “It’s affecting the lives of us Californians. And it’s generating billions — with a B — of dollars and will continue to do so.”

The state’s portion of the Cap-and-Trade proceeds are deposited in the Greenhouse Gas Reduction Fund, which are used to make climate investments that further the goals of the Global Warming Solutions Act of 2006 (Assembly Bill 32, Núñez and Pavley). Those climate investments provide tangible benefits — energy efficiency and weatherization upgrades for homes, clean vehicle incentives, tree planting and more — in communities across Californians.

Another portion of the Cap-and-Trade proceeds are being directly returned to the millions of Californians who are residential customers of an investor-owned utility, such as Pacific Gas and Electric and Southern California Edison. Customers of those utilities respectively received $50 to $60 in climate credits on their electricity bills in 2015.

The Luskin report assessed how the provision of climate credits directed to households would mitigate Cap-and-Trade related costs. The study also assessed two other types of strategies that indirectly mitigate these costs. As such, Gattaciecca factored in low-income rate assistance programs, which although unrelated to the Cap-and-Trade Program, can reduce households’ budgetary burden associated with electricity and natural gas consumption.

Gattaciecca also factored in state and industry predicted trends for electricity, natural gas, and gasoline consumption, which are affected by climate investments and other efficiency, fuel switching, and vehicle-miles reducing programs and policies that help households lower their use of energy and fuels. Because these policies and programs can help lower energy and gasoline bills, they indirectly lower any Cap-and-Trade compliance cost passed on to customers.

“We looked at four households in California,” Gattaciecca said. “We didn’t do that randomly. We took one in Oakland, one in Traver in Tulare County, one in Los Angeles and one in San Bernardino to collectively have a diverse set of case study communities. All four present different patterns when it comes to transportation, racial composition, housing types, family structure, climate and more. That’s the beauty of the report. We cover four very different locations. It’s not just policy and crunching numbers. There’s a human story here.”

“Real households benefits from climate investments deposited into the Greenhouse Gas Reduction Fund,” Callahan said. Senate Bill 535 (De León) requires that a minimum of 25 percent of the monies in this fund go to projects that benefit disadvantaged communities in California, and a minimum of 10 percent go to projects located in these communities. “I went to Washington, D.C., last year and presented at a national environmental justice conference. This is seen as one of the most significant environmental justice victories of the past decade.”

The results of their study left Callahan and the other researchers impressed.

“The California Air Resources Board is the lead agency on the Cap-and-Trade program and has a lead role in implementing climate investments,” Callahan said. “They’ve done a very thoughtful, thorough job. There’s more that can be done, but we commend them.”

A full copy of the Luskin Center report can be found here.