It was a celebration 50 years in the making, plus a few for good measure.

UCLA Urban Planning, launched in 1969, marked its golden anniversary this spring with a series of events aimed at showcasing the program’s activist ethos and focus on equity.

As a finale, alumni from across the decades joined students, faculty, staff and friends at a May 14 commemoration, “50 Years of Scholarship to Solutions.”

The crowd then moved to UCLA’s Franklin D. Murphy Sculpture Garden to enjoy music, food and drink, and reminisce about the last half-century of making a difference in Los Angeles and cities around the world.

During the gathering, Jacqueline Waggoner MA UP ’96, a member of the UCLA Luskin Board of Advisors, gave an update on the new Urban Planning Equity, Diversity and Inclusion Fund, established to support student fellowships and assistantships. 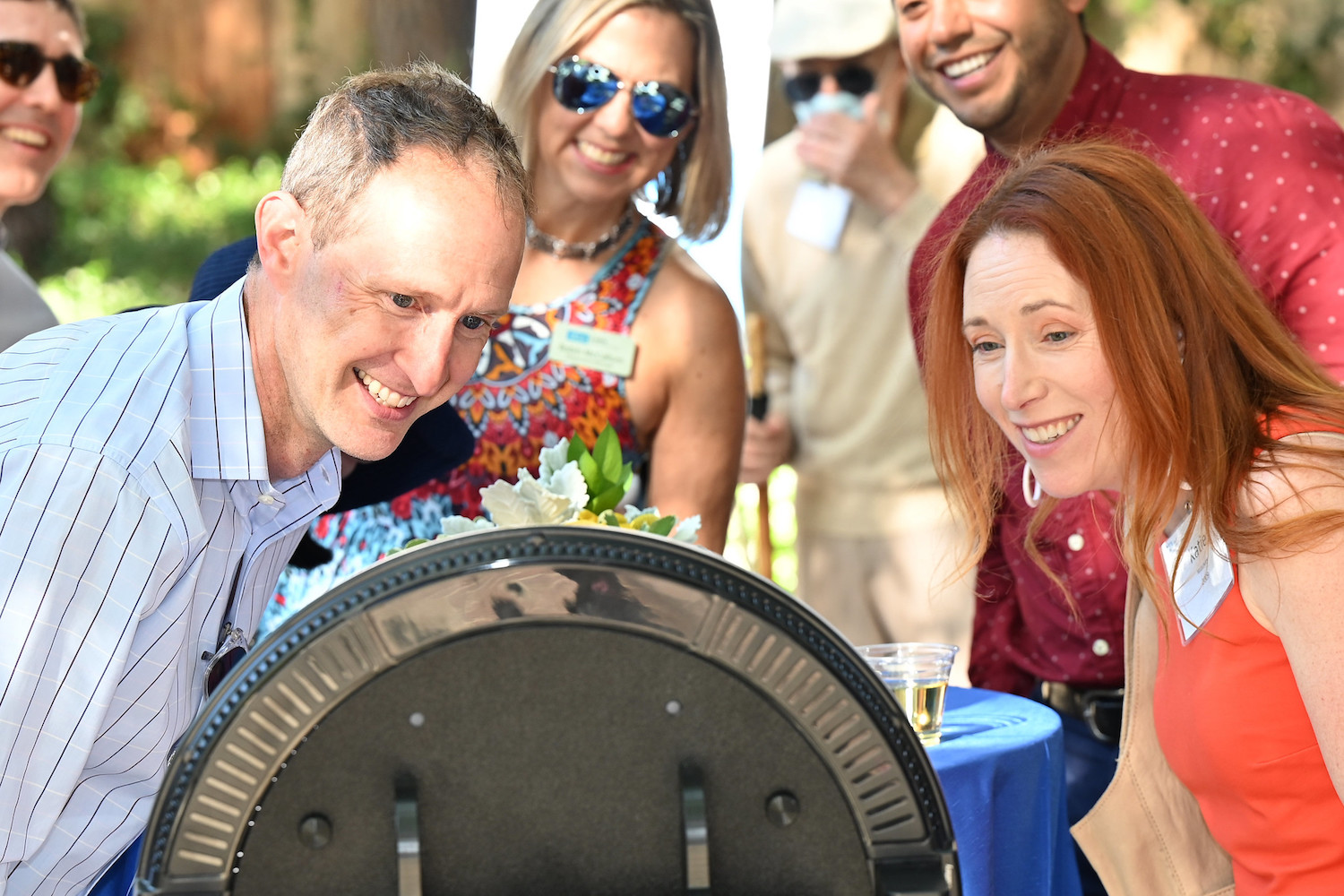 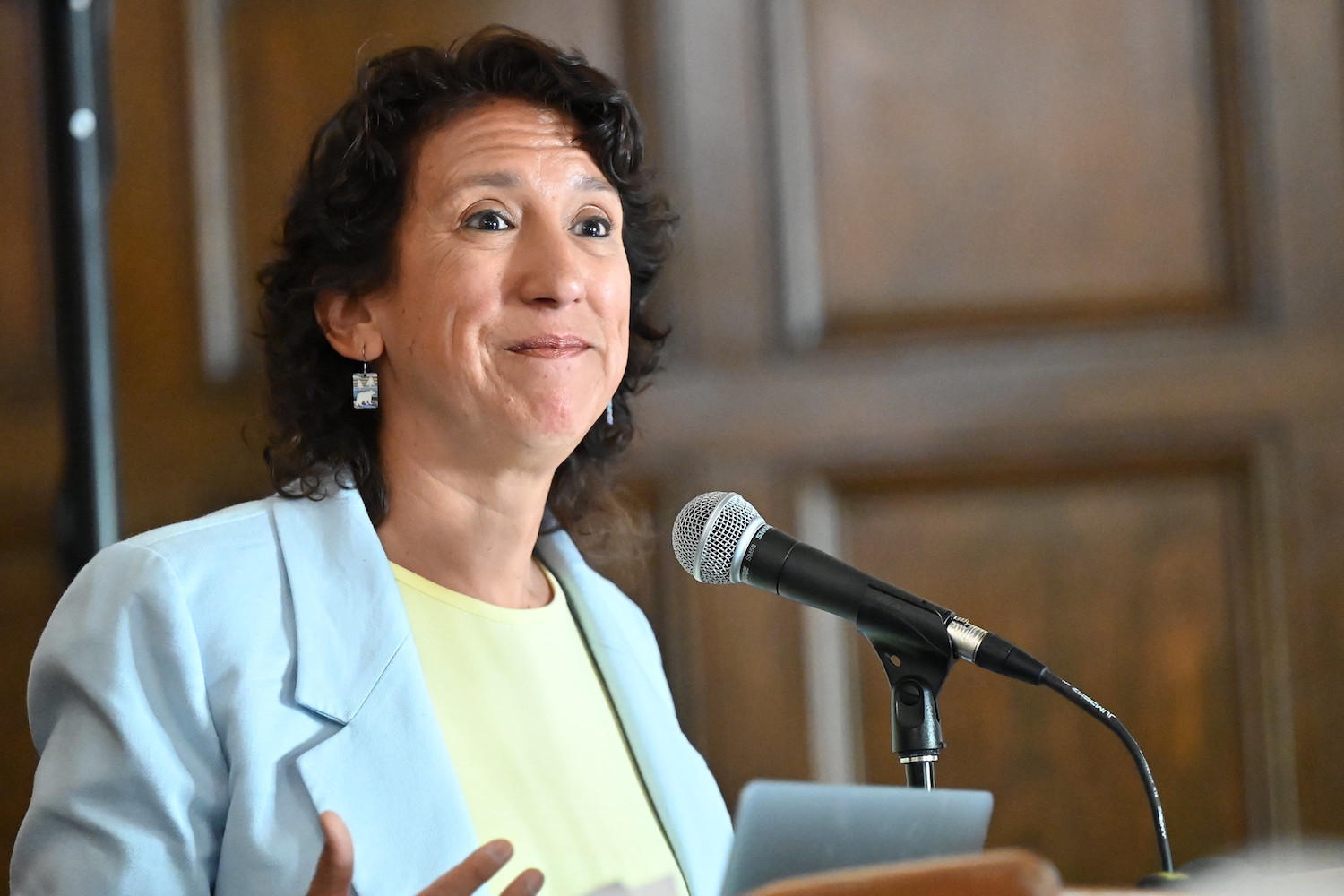 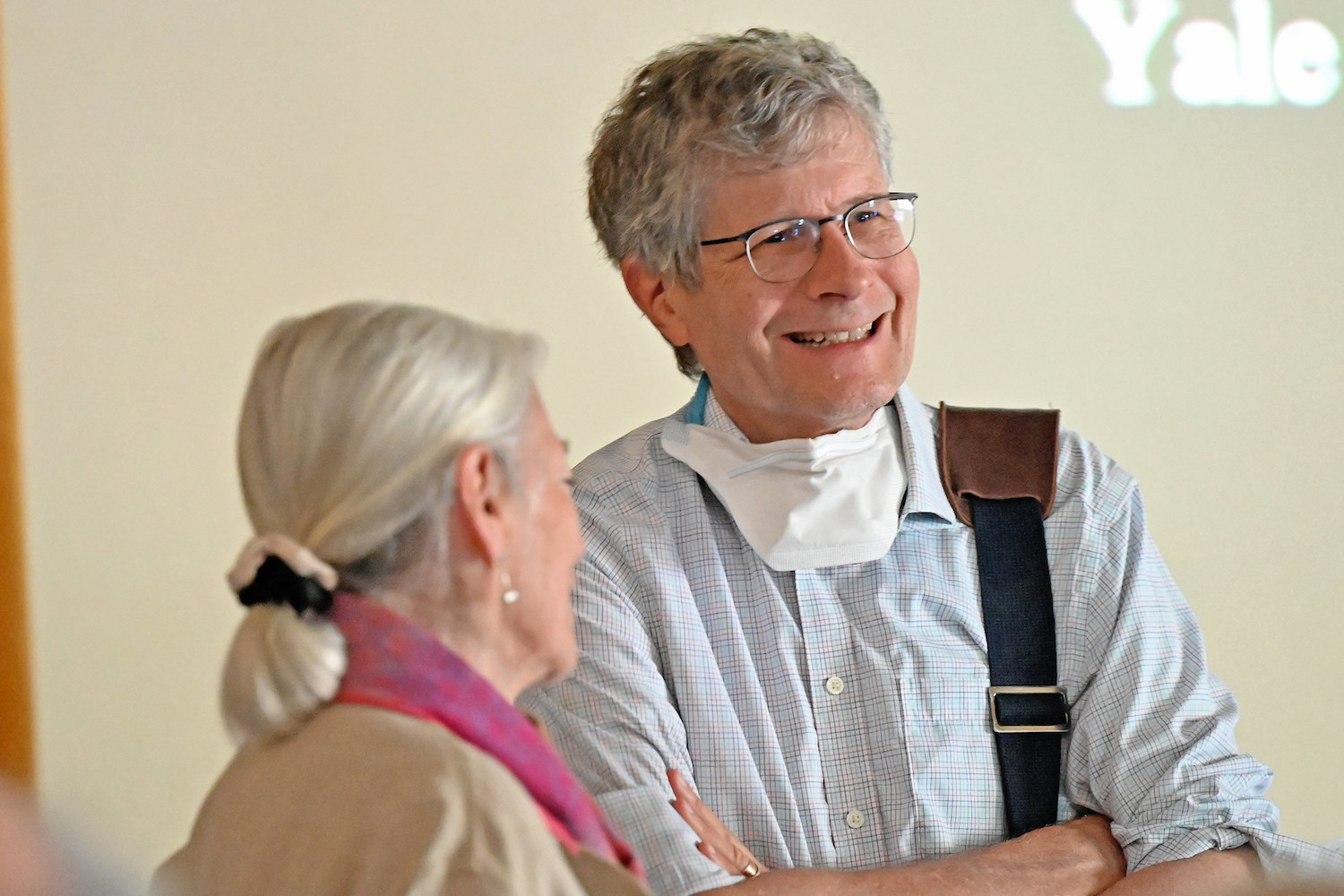 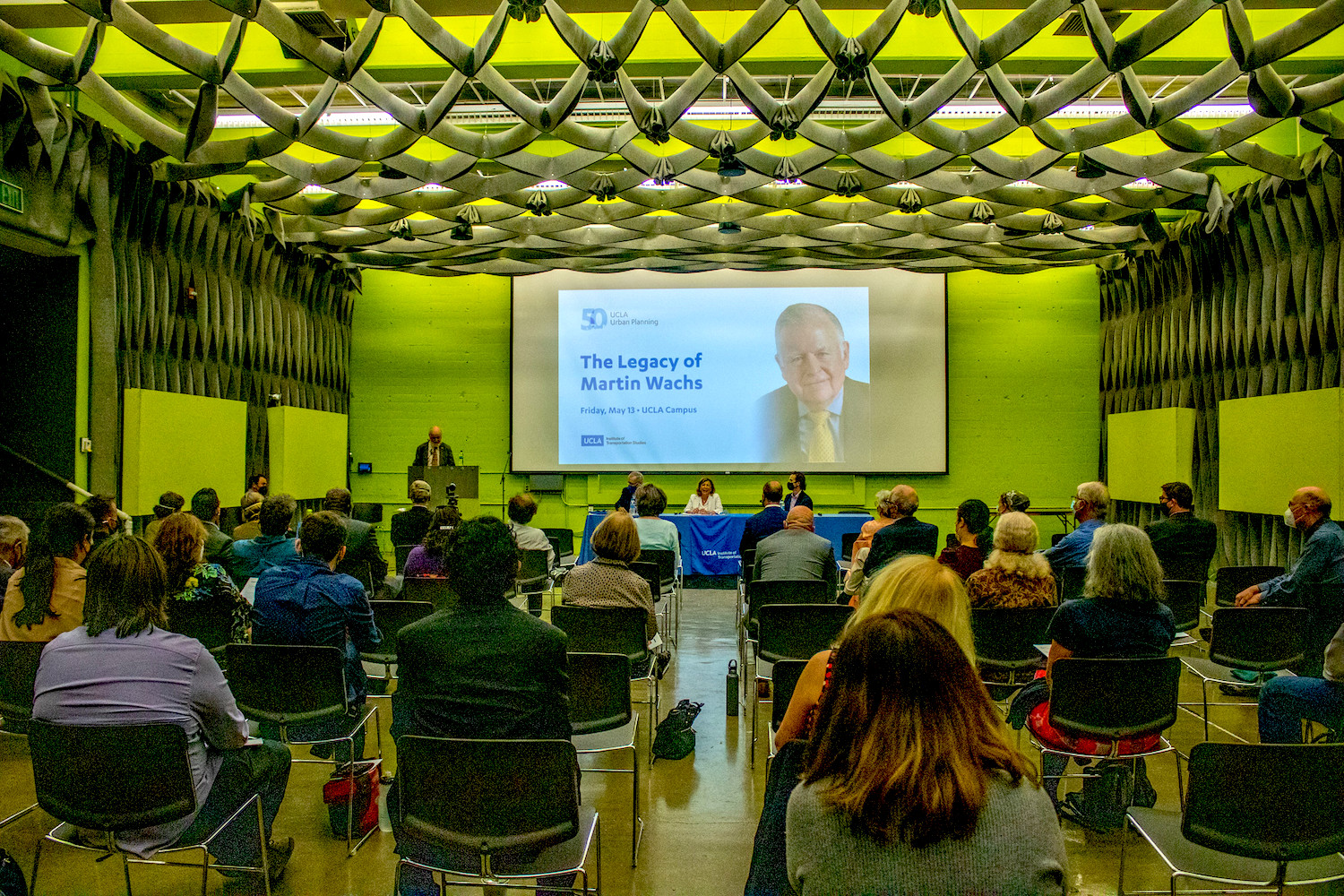 Since March, the 50th anniversary celebration has hosted thought leaders on planning, policy and environmental justice.

They included L.A. City Council member Nithya Raman, an urban planner by training, who came to UCLA to speak about the need for creative solutions of all types to make headway against the crisis of homelessness.

And Robert Bullard, known as the father of environmental justice, spoke of the undercurrent of racial discrimination beneath the growing climate crisis.

The weekslong commemoration also included an afternoon marking the legacy of Martin Wachs, scholar, mentor and key influencer of transportation policy and planning. Wachs, who died in 2021, held top research and leadership posts at UCLA and UC Berkeley for over five decades.

On May 13, students, colleagues and friends gathered to remember his impact and watch as Wachs’ wife, Helen, accepted two prestigious honors on his behalf: the Planning Pioneer award and the Planner Emeritus Network Honor award from the California chapter of the American Planning Association.

From its beginnings as part of UCLA’s School of Architecture and Urban Planning, the program has evolved and expanded. In the 1990s, it joined what is now the UCLA Luskin School of Public Affairs and continued to build a reputation of interdisciplinary, action-oriented scholarship.

Ranking among the top planning programs in the nation, UCLA Luskin Urban Planning offers master’s and doctoral degrees in urban and regional planning, as well as several dual-degree programs, including a new partnership with European research university Sciences Po in Paris.

Read more about 50 years of urban planning at UCLA.

View photos from the Urban Planning at 50 celebration.

View photos from the gathering recognizing the legacy of Martin Wachs.

The American Planning Association is a national organization that aims to unite leaders and professionals across the field of planning. Every year, the organization’s Los Angeles section recognizes the outstanding work, best practices and thought leaders that impact the built and natural environment in Los Angeles County.— Zoe Day

Professor Emeritus of Urban Planning Martin Wachs spoke to Forbes about the possible construction of a high-speed monorail in Los Angeles. Local officials are evaluating proposals for a $6.1 billion monorail that would aim to reduce traffic congestion in the city. Transit systems in Germany, Japan, China and India use monorails, but the Los Angeles project would be the first in the United States. Wachs is skeptical but open to the possibility that a monorail could work in Los Angeles. “When you actually work out the numbers and do a careful and thorough design, and consider that in most places where a transit route is being contemplated it’s being added to an existing network, it just hasn’t penciled out,” he said. Wachs recalled working with science fiction author Ray Bradbury on a monorail proposal that was rejected 50 years ago. “The world’s a better place for having people who are visionaries, but it also needs traditional engineers.”

A Los Angeles Times article on prospects that California’s troubled high-speed rail project could find new life under a Biden administration cited Martin Wachs, professor emeritus of urban planning. The project, initially designed to connect Los Angeles and the Bay Area with trains running at 220 mph, has faced a massive funding shortfall and difficulty acquiring needed land, among other challenges. While President-elect Joe Biden is a self-professed train fanatic, an imminent federal bailout of the high-speed rail project is unlikely. “Prospects for some financial participation by the federal government are better than they were, but it is easy to overestimate them,” said Wachs, a lead researcher at the Institute of Transportation Studies at UCLA Luskin. “There could be a few billion dollars, but it would not eliminate the need for the state to put the project on a sound financial footing.”

A StreetsBlog article highlighted the findings of a new paper by Professor Emeritus of Urban Planning Martin Wachs and graduate students Peter Sebastian Chesney and Yu Hong Hwang about the history of Los Angeles traffic congestion. Their paper, “A Century of Fighting Traffic Congestion in Los Angeles: 1920-2020,” delves into the many arguments over how to battle congestion in the city over the last 100 years. While solutions including improvements in public transit and construction of new freeways have been proposed, these strategies have never brought more than a temporary reprieve from the unrelenting growth in congestion, the authors say. They argue that in order to address traffic congestion today, experts must understand the city’s complicated history with public transit and transportation infrastructure. Today’s proposals are not much different from past solutions, and even though mistakes have been made, it’s not clear that lessons have been learned, they wrote.

Urban Planning Professor Martin Wachs joined the UCLA Luskin Center for History and Policy’s Then & Now podcast to discuss the history of traffic congestion in Los Angeles. Wachs was joined by MURP student Yu Hong Hwang and history Ph.D. candidate Peter Chesney. The three described the findings of their recent report, which challenged the myth of Los Angeles’ car culture. Wachs also noted that increasing transit capacity does not necessarily reduce traffic congestion. “Transit is important, but it is not an antidote to congestion,” he said. Instead, he explained that investing in transit means providing people with alternatives to driving so that they can choose to take a bus or train instead of a car. Looking forward, Wachs suggested implementing congestion pricing in Los Angeles. “We will have to learn to live with traffic congestion as long as there is a strong consensus that we would rather sit in traffic than pay a fee to avoid it,” he concluded. The report’s authors also discussed their findings in a recent webinar.

Listen to the podcast
Watch the webinar

Distinguished Professor Emeritus of Urban Planning Martin Wachs spoke with Transportation Today about local ballot initiatives aimed at securing tax dollars for funding road projects. With federal funding in decline, this type of ballot initiative — known as  LOST for “local option sales tax” — could be on the rise. Wachs cited a study showing that most of the transportation measures put before voters in 2018 were approved. Successful LOST measures have several things in common, including citizen audits, flexibility within limitations, and an end date that puts voters in charge of whether or not it’s renewed, said Wachs, a scholar at the Institute of Transportation Studies at UCLA Luskin. The article also cited Jeremy Marks MURP ’20, who said a database has been created to provide planners and other interested parties free, comprehensive information on every LOST measure put before California voters.

Professors Brian Taylor and Martin Wachs of the Institute of Transportation Studies at UCLA Luskin co-authored a Streetsblog article calling for transportation equity as public officials decide how to move forward on transit projects in a pandemic-battered economy. Since the outbreak of COVID-19, L.A. Metro has reeled from revenue losses, raising questions about whether some planned rail and road construction projects should be postponed or even canceled. Taylor and Wachs argue that priority should be given to improving bus service in lower-income communities where most carless families live. “People of color and those from low-income households are more likely than others to depend on transit to get to health care, schools and jobs. Equity demands improving transit service where they live,” they wrote. They added that expanding transit operations creates stable, unionized jobs with health and retirement benefits, which are much needed in the current economy.

California could lose up to $20 billion in transportation revenue over the next 10 years because of the COVID-19 pandemic, according to research released May 12 by the Mineta Transportation Institute, or MTI.

Researchers Asha Weinstein Agrawal of MTI at San Jose State University and Hannah King and Martin Wachs of UCLA Luskin projected how much revenue will be generated over the next decade by state taxes on fuel purchases and fees on vehicle ownership. COVID-19 has reduced those revenues substantially because people are driving less and therefore buying less fuel.

“Under a worst-case scenario, a slow economic recovery could cause California to receive 17% less revenue through 2030 than the state would have received without COVID-19,” said Agrawal, the director of MTI’s National Transportation Finance Center. The projected revenue for the slow-recovery scenario is $98 billion, compared to a projected $118 billion without the pandemic.

State policy choices could impact projected revenues, according to the study. The researchers identified a recovery scenario that could generate $121 billion, a 3% gain, thanks to a swift and complete economic recovery coupled with policies to encourage Californians to purchase electric vehicles.

“California policymakers are hastily planning for a future with less-than-anticipated revenue,” said Wachs, a professor emeritus of urban planning at UCLA and a researcher at its Institute of Transportation Studies. “The scenarios in this study are not predictions of what will happen, but with so much uncertainty about the future, they help policymakers ask important ‘what if’ kinds of questions.”

The study focused on transportation revenue collected by the state thanks to a package of taxes and fees established in 2017 by Senate Bill 1. This revenue comes from gasoline and diesel fuel taxes, an annual fee on vehicles with the rate based on vehicle value, and an annual fee for zero-emission vehicles.

The report did not include transportation funds in California that are raised locally through transit fares, tolls, sales taxes and property taxes. Nor did it include any federal funding that would aid in transportation recovery.

A shortfall in state transportation revenue would trickle down to drivers.

“Revenue shortfalls will likely result in both reduced maintenance and delayed capital investments,” Agrawal said. “Drivers will have to wait longer for planned improvements like replacing outdated bridges and rehabilitating freeways.”

The researchers modeled scenarios based on transportation-specific variables that are most likely to be affected by COVID-19, including fuel consumption, the number of registered petroleum-powered and electric vehicles, and the price of cars. They also projected potential revenue from possible government policies to stimulate the market, such as tax credits to encourage vehicle purchases.

The study was funded by the Mineta Transportation Institute at the request of the California Transportation Commission. The researchers were scheduled to present their findings during a virtual webinar on May 14.

The lead author of the study was Agrawal. King is a doctoral student in urban planning at UCLA.

Martin Wachs, distinguished professor emeritus of urban planning, was featured in a Los Angeles Times column discussing the effect of the coronavirus pandemic on traffic levels in Los Angeles. During the pandemic, vehicle volume has been reduced by 40% and more in parts of the city, air quality has improved, and traffic is moving 12% to 30% faster. Nevertheless, urban planning experts doubt the roads will stay empty when the economy reopens. Wachs pointed to congestion pricing as the only proven way to get people to drive less. ”The only strategy that works 100% of the time is charging people more money,” he said. “Charge more to park, charge to drive, quadruple the cost of gasoline, impose congestion pricing.” Traffic jams in the Sepulveda Pass could be eliminated by charging people $10 to make the trip, he said. However, many politicians are hesitant to embrace congestion pricing because they don’t believe their constituents want it.