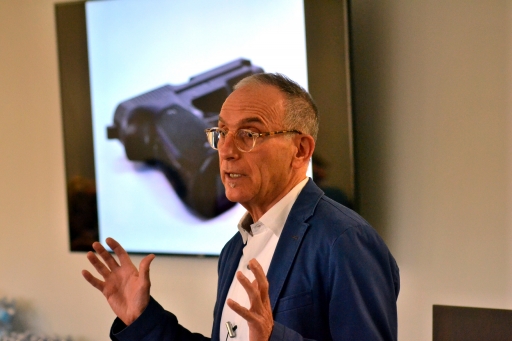 A new special edition of a social work journal focuses on gun violence in part because of guidance provided by Mark Kaplan, professor of social welfare at UCLA Luskin.

Kaplan was part of an editorial team of social work scholars from throughout the United States who bring together research on various aspects of firearm violence in the November edition of Health & Social Work, which is published by the National Association of Social Workers (NASW) Press and Oxford University Press.

He said that the special edition was meant to spark serious discussion and serve as “a call to action to people to begin thinking of this as a major challenge in professional circles.”

According to an editor’s note about the special issue, “The field of social work has an obligation to address significant issues affecting clients and communities, including the outstanding issues of gun violence in the United States.”

Firearm violence in the United States is considered a public health crisis, and statistics cited in connection to the special issue paint a sobering picture.

Almost 40,000 people — about 60 percent from suicide — die annually. A large proportion of those dying are young people, the editors noted in their call for papers. Not all populations are affected equally — African American men make up the majority of firearm homicides.

The special issue also looks at the stress faced by people who survive shootings, pointing out that many live with chronic effects from their injuries. Gun violence affects immediate victims plus their families and communities.

Kaplan serves on the Board of Scientific Counselors for the National Center for Injury Prevention and Control, a branch of the Centers for Disease Control and Prevention. And he is a scientific advisor to the American Foundation for Suicide Prevention.

“Given the alarming rates of gun deaths in this country, the time seems right for social workers to address this issue in a more comprehensive way,” said co-editor Mickey Sperlich, an assistant professor at the University at Buffalo’s School of Social Work. The volume’s other co-editors are Patricia Logan-Greene, also an associate professor at the University of Buffalo, and Karen Slovak, who serves on the faculty of the School of Social Work at Capella University in Minneapolis.

Although recent mass shootings across the country have heightened public awareness and concern, policy action and research remain obstructed at the federal and state levels by strong opposition from national anti-gun-regulation groups, according to the editors. They note that some professional organizations have responded to this crisis by issuing comprehensive policy statements and practice guidelines for frontline workers, but little guidance exists for social work practice.

Contributors to the special edition delve into the relationship of firearm violence to race, gender and geography, as well as a less-publicized aspect — suicide.

Articles focus on the impact of firearm safety legislation on homicide rates and data that show differences in effectiveness for black and white populations. Another article looks at how fear of crime and racial bias influence gun ownership, especially for white people. A literature review of gun violence published in social work journals since the 1990s identifies the strengths and weaknesses of existing scholarship. Another literature review of community-based gun violence interventions suggests the value of systems-based approaches.

An article by Kaplan and his co-authors looks at the effects of firearm control policies on suicide rates for men, a “hidden epidemic” that accounts for the majority of deaths — not only of suicides but all gun-related deaths nationwide.

“One of the things we tried to do with the hidden epidemic paper was to even dig deeper and show that suicides involving firearms are even more hidden than other forms of gun violence, which often get most of the attention,” Kaplan said. “Most gun deaths in the country are suicides.”

At one level, the more guns in a community and the more guns in a state, the greater the age-adjusted firearm suicide rate, according to the article. “There are policy levers that we identified,” Kaplan explained. “So this is an epidemic that may be amenable to policies that would restrict people’s access, population-level access, to guns.”

In a “Viewpoint” article, Kaplan writes that “evidence suggests firearm-means restriction and firearm-suicide prevention represent gaps in social work education and practice, offering opportunities for universities and continuing education programs.” By increasing knowledge in this area, social workers can effectively engage their communities and advocate for stricter firearms laws. When enacted statewide, such laws lead to decreased numbers of firearm suicides.

A “Practice Forum” in the volume describes how social workers who were already engaged in a community-violence-prevention initiative responded to local outrage over the shooting of Alton Sterling, a 37-year-old black man and father of five who was shot and killed by Baton Rouge police in 2016.

“Social workers have an important role to play in supporting communities to heal and promoting community health in the aftermath of gun violence and trauma,” the authors conclude.

“Hopefully, it’s the start of a conversation that people will have about resorting to means that are more policy-oriented approaches,” Kaplan said. But he cautioned, “This is not a problem that will be resolved or addressed adequately on a one-by-one individual level. This is a much larger problem that needs to be addressed in a more upstream, universal way.”

For more information on the special edition of Health and Social Work and to access the articles, visit Oxford University Press (Oxford Academic) or NASW Press.